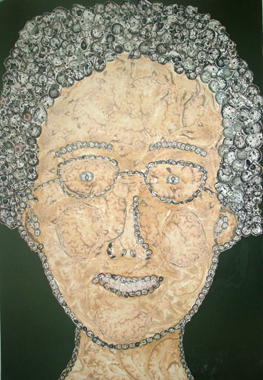 Memory Found was a collaborative art project between artist Lucia Barnes, patients with dementia and staff at the Charlie O’Toole Day Hospital, The Adelaide & Meath Hospital, Dublin, and family carers of people with dementia, which was hosted at The Carers Association’s, North Dublin office based in Blanchardstown, Dublin 15. The project aimed to explore the medical, emotional and social issues surrounding dementia through experimenting in various art processes with patients and their carers. As well as celebrating the participants’ creativity, the project also hoped to bring a greater understanding of the patient’s experience of dementia and its impact on carers and families. An exhibition of the work produced through this project is now on display at Rua Red Arts Centre, Tallaght.

Artist Lucia Barnes designed an art programme which took into account the sensitivities of working with people with dementia. She began by taking photographs of participants to use for self-portraits, and over time introduced imagery such as favourite chairs, food, cups, and styles. Over a twenty week period the group used pencils, charcoal, pastels and paint. Members of the group participated on different levels, from carefully considered creations to clusters of scattered lines and shapes. Randomly selected brain scans were used for further inspiration, examining the images within them and the responses of participants.
As part of the project, a small group of family carers of people with dementia were afforded the opportunity to experience art making and receive an introduction to a creative outlet that could later be pursued at home. During the eight weekly art sessions, participants were given a forum to share stories, both funny and sad, and to empathize with each other in a group camaraderie setting.
Partners: The project was generously sponsored by the Adelaide Hospital Society. We thank all the staff in the Charlie O’Toole Day Hospital for their support and participation in this project.
For more information about the hospital arts programme or to make a donation/sponsor the arts please contact: Hilary Moss, Director of Arts and Health, National Centre for Arts and Health on 01 414 2076/ hilary.moss@amnch.ie