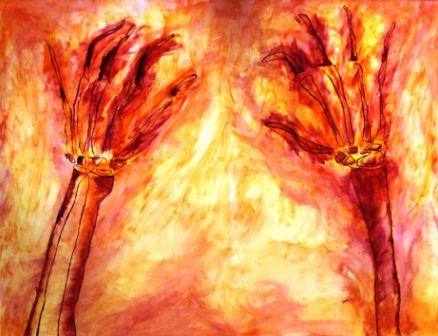 A patient-artist from the Adelaide and Meath Hospital, Tallaght (AMNCH) who created a work entitled The Claw was a selected finalist in an exhibition for the duration of the World Congress of Physical Therapy 2011, in Amsterdam, 20-23 June.

Outstanding pieces of artwork were sought representing the role of physical therapy/physiotherapy within the congress theme of Movement for Health including:

Jo Killalee, a patient of AMNCH was runner-up (painting category) and had her work exhibited at the international event in Amsterdam. Jo lives in Tallaght and created The Claw as part of ARThritis, an art group for patients with rheumatoid arthritis. The purpose of the project was to give patients the chance to try art, explore their creativity and to express their feelings about their condition through a creative medium. The works of masters such as Renoir, Dufy and Klee, who also suffered from arthritis, were studied. X-rays of the patients’ arthritic joints were used as inspiration for the final designs and this work started from an x-ray of Jo’s hand.

Dr David Kane, Consultant Rheumatologist at AMNCH said: ‘The outlet to creativity has positively enhanced general well being and a sense of worth in patients who believed their damaged joints were not fit for purpose.’ He added that Jo, whose work was exhibited in the World Congress in Amsterdam last week, is absolutely delighted to have achieved so much with her art and has gone on to attend further art classes since joining the first group. One patient attending the class, said: ‘When I realised that I could make art with my hands, I thought ‘what next?’’

For further information contact the National Centre for Arts and Health on 01 4142076.