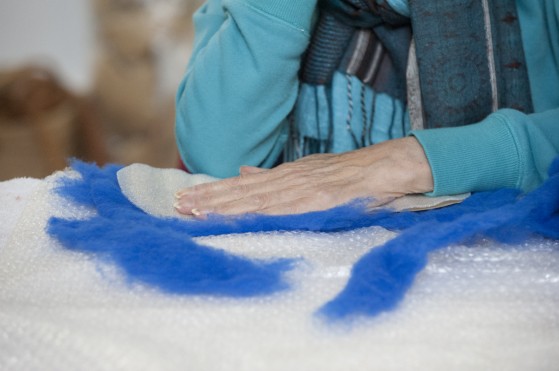 An international seminar on 30 May 2013 organised by Kildare County Council Arts Office will share with European partners the learning from the inter-generational arts project, If You Were In My Shoes. This project was a year-long community participatory arts engagement which involved the creation of individual felt slippers and the collected stories, observations and opinions of participants that emerged during the process. The project culminated in an exhibition at The Arts and Culture Centre, McAuley Place, Naas from 7-14 March.

If You Were In My Shoes explored via visual arts, text and performance the idea of being in ‘somebody else’s shoes’. The project involved residents at McAuley Place, other older people in the community and young people from secondary schools and youth initiatives in Naas collaborating with a felt artist and writer. The aim of the project was for each participant to create a pair of bespoke customised felt slippers and, during the process, to explore the use of personal physical objects as inspiration and stimulus for memories. A particular objective of the project was to actively engage older participants who are ‘house bound’. A photographic portrait of each participant completes the project.

If You Were In My Shoes represented the next stage of the vision and development of the Nás na Ríogh Housing Association Arts Programme and included a professional development element for carers by working in association with the Kildare Carers Association on the practical dissemination of an inter-generational arts project.

During the exhibition at McAuley Place, Naas, launched on March 7, each participant’s pair of customised slippers was displayed alongside their texts and portrait photograph. The exhibition will tour the community, schools and arts venues in County Kildare, nationally and internationally from March – June 2013.

SEMINAR: ‘If You Were in My Shoes Now’

Led by Nás na Ríogh Housing Association, Naas, international partners will join Irish delegates from County Kildare, national arts and health networks, Age Concern and Bealtaine Festival on 30 May to meet with people who participated in the project. At the seminar, the project’s creative director, Tony Fegan, facilitators and participants will share experiences to encourage delegates to debate creativity and participation in the arts as a lifelong cultural entitlement.

For more information on this seminar and the project please email arts@kildarecoco.ie

The IYWIMS seminar is taking place as part of Culture Connects, the Arts Council programme marking Ireland’s Presidency of the Council of the European Union (1 January – 30 June 2013). The seminar forms a strand of the Culture Connects programme called Local Arts Europe which encompasses 23 partnership projects led by Local Authority Arts Offices and Ealaín na Gaeltachta that invest in artistic and professional relationships between Ireland and other places in Europe.