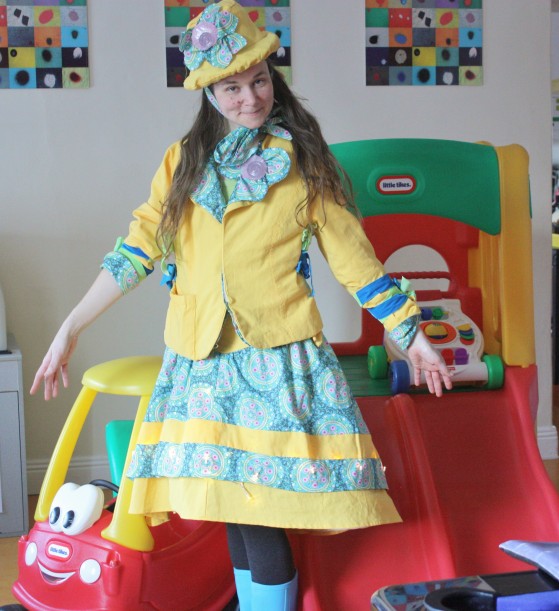 Story Dress, a storytelling and technology performance project for children in hospital developed by Helium, piloted at a children’s hospital in Dublin in April 2013. The project revolves around a uniquely designed interactive storytelling dress which has in-built lighting effects and an embedded soundscape, activating music and sound effects as artists Eléonore Nicolas and Fiona Dowling tell children stories on the wards.

The artists not only want to create a memorable experience for children in hospital, they also want to encourage children’s creativity after their visit is finished. With this in mind, Eléonore and Fiona have devised storytelling cube props which are left with the children enabling them to invent new stories in their own time.

Artist Eléonore Nicolas has described the effect the storytelling dress had on children, families and staff when she first arrived on the wards in April:

‘Everybody in the hospital stopped in their tracks to look at the dress. All the kids who heard the song got out of their beds and popped their head out of the door to see the dress and hear the sounds. It’s a brilliant way to get the audience’s attention and start a story, which is exactly why this project happened in the first place!’

‘Story time is often the moment for parents to make a phone call or get a cup of tea, but last Saturday, I could see intrigued parents staying to watch what was going to happen and so did the staff. There was one particular time when I was telling a story about a little boy watering a plant. Everytime he pours water on the plant I activated the sound of water pouring from my dress. This sound is so sharp and crisp, as well as being beautiful and unexpected, that the whole room would stop to listen to the story.’

Story Dress has been developed by Helium Children’s Arts and Health in association with artists Eléonore Nicolas and Fiona Dowling, dressmaker and design consultant Caitriona Ni Threasaigh, and music and digital artists Mark Linnane and Fionnuala Conway. The project was funded through a Helium Fund:It campaign and is currently supported by the Arts Council.

Story Dress will continue as a rolling one-year hospital residency. You can follow the development of the Story Dress project @ http://storytellersnewgambit.wordpress.com/