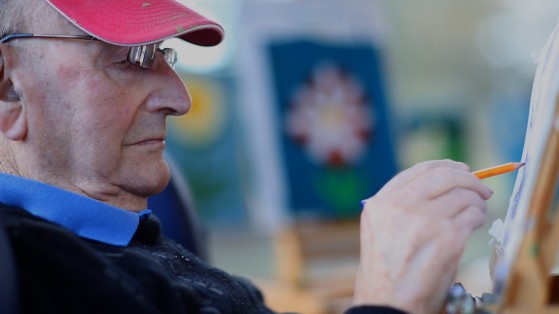 The Room, the result of the 2013 artsandhealth.ie documentation bursary, has been shortlisted for the 2014 Irish Council for Civil Liberties (ICCL) Human Rights Film Awards. The film which was made by Róisín Loughrey documents an arts programme involving people who have an acquired brain injury, which is facilitated by artist Tom Meskell at the Sacred Heart Hospital in Castlebar, Co. Mayo. Using a fly-on-the-wall approach, the film is a powerful and moving portrayal of the creative experience of long-stay hospital residents who have an acquired brain injury as a result of stroke, accident or conditions such as dementia or Alzheimer’s and reveals the profound impact of the arts programme on their lives.

The Irish Council for Civil Liberties (ICCL) will host a star-studded Gala screening of the six shortlisted films on 26 June 2014 in Dublin’s Light House Cinema. The Awards Jury members include Frank director Lenny Abrahamson, playwright and screenwriter Conor McPherson (I Went Down, The Actors, The Eclipse) and Love/Hate’s Brian Gleeson.

The shortlist consists of six hard-hitting documentaries that combine filmmaking with international human rights activism. Issues explored include homelessness, the arts and their impact on health, immigration, holocaust survivors, the land/food crisis in Guatamala and the plight of Syrian refugees.

The Room is available to view here: http://www.artsandhealth.ie/resource/videos/the-room/

All of the nominated films are available to view on the Awards website here.