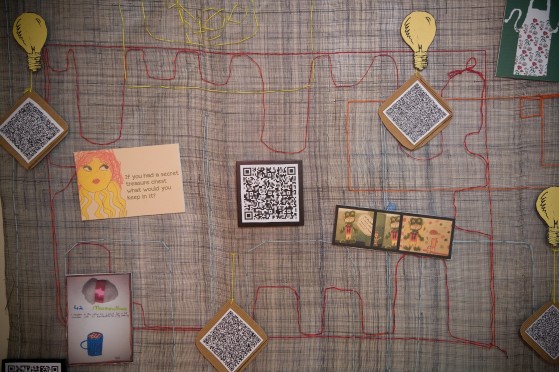 On 8 June 2015, the paediatric ward of Cork University Hospital (CUH) will be transformed as teenage patients take part in Radio/Silence, an interactive radio play that will be broadcast on CUH radio. For the past seven months, artist Eszter Némethi has been developing captivating stories and games with teenagers on the ward as part of Helium’s Cloudlands project. Now the teenagers’ imaginings will come to life in Radio/Silence which invites radio listeners throughout the hospital to take part using their mobile phones and decide what the outcome of the game will be.

The game uses technology similar to that experienced by people when they phone a government department. Participants make choices using the numbers on their keypads and can opt for different paths to follow. The teenagers’ stories have been woven into a narrative by Eszter and will be recorded by professional voice actors, with sound designer Carl Kennedy and Tom Swift of the Performance Corporation part of the creative team. The fact that anyone in the hospital can tune into or happen upon the Radio/Silence game brings the teenagers’ stories to the larger hospital population.

What is Radio/Silence?
Radio is boring, but what if it could save your world? Radio/Silence is a radio-game about the need to somehow be a hero even if you don’t feel like it. It is the Johnny and Pies Show and business as usual when a mysterious virus starts to sweep through the hospital. In what seems like the spread of nonsense, silence starts to take over the hospital. Reality and fiction become entwined. Even the radio starts to lose its signal. Your phone and an unwilling superhero are the last hope to get back to reality. What will you do when you have the control? Are talking birds, the hand of doom, never-ending jokes and teleportation a better alternative to reality? Be the hero of the story and decide (or not).

A podcast of Radio/Silence will be made available through the Helium website: www.helium.ie