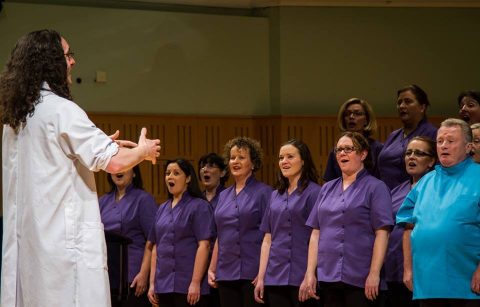 Music and song is alive and well among the staff working on the Cork University Hospital campus with two workplace choirs in existence, both participants in the recent HMI Workplace choir competition in conjunction with RTE Lyric FM. The Ultrasounds who are based in Cork University Maternity Hospital finished second in this year’s competition. With their conductor, Padraig Wallace, and accompanist, Ronan Holihan, The Ultrasounds impressed the adjudicators with their performance of Lullaby and Save The World / Don’t You Worry Child.

They were joined in the final by Cork’s newest choir, SCRUBS, the CUH Workplace choir which is made up of current and retired staff from other parts of the hospital. The choir, which was especially formed to take part in this year’s competition, was delighted to reach the final at the first attempt and performed What a Wonderful World and California Dreamin under conductor Patrick Dalton and accompanist Ultan Lavery. The experience proved so enjoyable that the choir has decided to stay together and take part in various events both inside and outside the hospital. SCRUBS rehearse every Tuesday from 5 to 7pm and the choir currently has 60 members with several other staff waiting to join.

The benefits of choral singing are numerous and SCRUBS has already raised staff morale & team spirit throughout the hospital. The choir participated in Culture Night on 18 September, performing for a large audience of staff, patients and visitors and also held an open rehearsal in the Atrium of the Cardiac Renal Centre on 6 October to celebrate National Choral Singing week. The open rehearsal was an opportunity for other staff who like singing to come along and see if they would like to join the choir. Being a hospital choir, SCRUBS is aware that patient care and shift working may prevent staff from attending every rehearsal.  However, the choir provides a great outlet for staff who may have had a tough working day to unwind and sing with colleagues in a relaxed atmosphere.