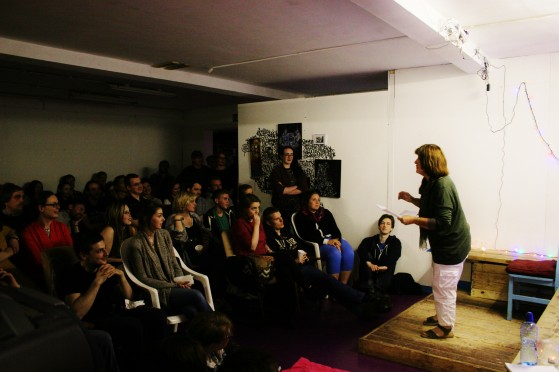 Flying South is a free, monthly, mental health themed arts and open mic night in Dublin. First opening its doors in March 2015, Flying South has found a new home in Tiger Dublin Fringe Festival’s Fringe Labs in Temple Bar and will host its first event there on 3 December 2015 at 7pm. In addition to the open mic section which invites people to share their work, Flying South also showcases a wide range of performers. The featured acts for December are Phil Lynch, spoken word and page poet Anne Tannam, and singer Gavin Mee.

‘Flying South began as an idea amongst a group of friends – all of us had experienced mental health difficulties throughout our lives and all of us were involved in the arts in some capacity. It seemed very natural and obvious to us that there was a crossover between the two things, but we had yet to find a space in which this was expressed, even within mental health services; several members of the founding committee had spent time in various facilities for mental health problems and found a distinct lack of treatment being offered beyond the purely clinical, particularly in the public health sector.’

‘We wanted to create an accessible and community based space where people were free to express themselves on the topic of mental health in whatever way they chose and for them to be heard and supported. Writing, art and performance are such powerful tools in expressing and processing trauma and it’s incredible how open people are when simply given the space. It really has been an amazing journey so far and we never imagined it would become so successful so quickly – I think that a lot of people were waiting for this kind event for a long time and the honesty and support of all the participants has been overwhelming.’

All types of spoken word with a focus on mental health are welcome – poetry, performance, storytelling, comedy, drama, songwriting. Open mic performers sign up at the door on the night to do one or two pieces of under five minutes in total, with three more-established featured acts also gracing the bill.

‘We try to create a “safe space”, which for us basically means that everyone is respectful of each other and the acts and that people are quiet when acts are on stage. There have been some really powerful performances of a kind that you don’t really see so much at regular open mics. We also do some audience participation where people who don’t want to perform can write anonymous messages which the MC will then read out. It’s a community-based event, so we also try to encourage people to just talk to each other in between performances ? we have two intervals during every show and provide tea, coffee & cakes (the space is strictly alcohol-free).‘ – Kate Quigley in conversation with First Fortnight

First Fortnight is an annual mental health arts festival which takes place every January. Flying South at First Fortnight 2016 will feature a host of honest, insightful & moving performers, united by a common theme of creative mental health expression. Aiming to provide a safe, understanding space for people to share their experiences, the first Flying South of 2016 will kick off on New Year’s Day in Filmbase, Temple Bar at 7pm. Entry fee is €5. Bookings: https://firstfortnight.ticketsolve.com/#/shows/873543788

Don’t take our word for it

‘I strongly recommend this event for anyone. It is an incredible safe space where people can express their own experiences without fear through art, music, poetry or any other mean.It is truly amazing. Just being there can teach you a great deal about mental health. Trust me!’

‘Normally I’m someone everyone else goes to for help. What I love about Flying South is that it allows me to go for help for myself.’

‘It was also surprising to see people of all ages and backgrounds, poets, students, musicians, artists, academics, the unemployed, people who’d come for a nosey, actors, civil servants, housewives, pensioners and loads and loads of young people. What united them all was an interest in mental health… Everyone it seems has been affected by mental illness in one way or another. This became clear as Kate interspersed the different acts with the often painful words of audience members, reading from the anonymous notes that they had handed in earlier. These told of people’s struggles with depression, schizophrenia, suicide, self-harm and addiction… There was a wide range of readers, from first timers and established poets to wordsmiths and hip hoppers and everything in-between.‘ – Review of Flying South at LINGO Spoken Word Festival

Keep up to date with Flying South events through their Facebook page: https://www.facebook.com/FlyingSouthDublin/