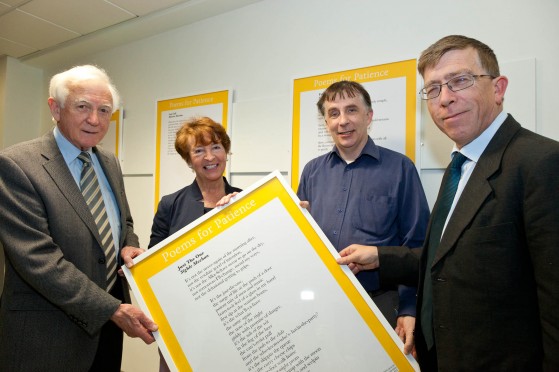 Galway University Hospitals Arts Trust is seeking entries for its annual poetry competition. The winner will have her or his poem published and displayed on the Arts Corridor of University Hospital Galway as part of the 2016 Poems For Patience and will be invited to read the poem at the launch of the 2016 Poems For Patience at the Cúirt International Festival of Literature in April 2016. The closing date for entries is 11 March 2016.

CRITERIA
Poems entered in the competition should be no more than 30 lines long. They must be the original work of the entrant. Poems previously published in magazines or poetry collections are eligible. Poets can enter as many poems as they wish.

Payment should be made by cheque or postal order payable to Galway University Hospitals Arts Trust.

THE JUDGE
The competition judge is Kevin Higgins. Kevin Higgins is Writer-in-Residence with Galway University Hospitals Arts Trust. He facilitates poetry workshops at Galway Arts Centre; teaches creative writing at Galway Technical Institute and on the Brothers of Charity Away With Words programme. Kevin also teaches poetry on the NUI Galway Summer School programme and on the NUIG BA Creative Writing Connect programme. He is the poetry critic of the Galway Advertiser. Kevin is co-organiser of Over The Edge literary events. His first collection of poems The Boy With No Face was published by Salmon in February 2005 and was short-listed for the 2006 Strong Award. His second collection, Time Gentlemen, Please, was published in March 2008 by Salmon. His work also features in the anthology Identity Parade – New British and Irish Poets (Ed Roddy Lumsden, Bloodaxe, 2010) and in The Hundred Years’ War: modern war poems (Ed Neil Astley, Bloodaxe, 2014). Frightening New Furniture, his third collection of poems, was published in 2010 by Salmon Poetry. Mentioning The War, a collection of his essays and reviews was published by Salmon in 2012. Kevin has read his work at most of the major literary festivals in Ireland and at Arts Council and Culture Ireland supported poetry events in Kansas City, USA (2006), Los Angeles, USA (2007), London, UK (2007), New York, USA (2008), Athens, Greece (2008); St. Louis, USA (2008), Chicago, USA (2009), Denver, USA (2010), Washington D.C (2011), Huntington, West Virginia, USA (2011), Geelong, Australia (2011), Canberra, Australia (2011), St. Louis, Missouri (2013), Boston, Massachusetts (2013) & Amherst, Massachusetts (2013). His poetry has been translated into Greek, Spanish, Italian, Japanese, Russian, & Portuguese. Kevin’s fourth collection of poetry, The Ghost In The Lobby, was published by Salmon Poetry in 2014. Kevin is satirist-in-residence with the alternative literature website The Bogman’s Cannon. His next book 2016 – The Selected Satires of Kevin Higgins will be published by NuaScéalta in 2016. Song of Songs 2:0 – New & Selected Poems will be published by Salmon in Spring 2017.