The Health Research Futures Lab is a funded workshop aimed at enabling interdisciplinary research/project work across Arts, Humanities and Social Sciences (AHSS, including Business) and Science Technology Engineering & Maths (STEM). Successful applicants will be given the opportunity to participate in two 2-day workshops in Limerick where they will be facilitated through a design-led process, supported by the consortium team as well as a number of research support staff. The deadline for applications is 4 March 2016. END_OF_DOCUMENT_TOKEN_TO_BE_REPLACED 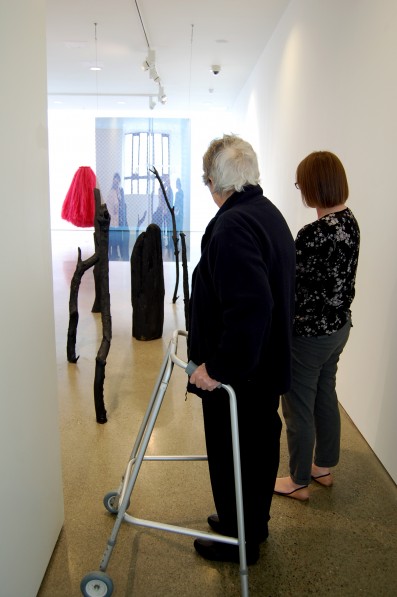 West Cork Arts Centre’s In the Picture programme offers opportunities for older people – living in residential settings or being cared for in their own homes in the West Cork area – to participate in bespoke facilitated experiences in the galleries. The programme, which began in spring 2015, is inspired by the ‘Meet me at MoMA’ programme at New York’s Museum of Modern Art, designed to give older people and people living with dementia an opportunity to participate in art and cultural venues. Eighty-nine-year old Bantry woman Sheila Goggin recently visited Uillinn: West Cork Arts Centre to take part in the programme.  END_OF_DOCUMENT_TOKEN_TO_BE_REPLACED

Shine a Light Suicide Awareness presents Bring Me Back Alive by Patricia McCann at Firkin Crane Theatre, Cork on 26-27 February 2016. Set in a youth centre in modern day Dublin, this award-nominated play explores teenage suicide and highlights the warning signs to look for in a person contemplating suicide, the need for more mental health services and the devastating effects that suicide has on family and friends. END_OF_DOCUMENT_TOKEN_TO_BE_REPLACED

Barnstorm Theatre Company takes its award-winning production of Monday’s Child on tour from 20 February 2016, taking in 12 venues in 11 counties. Monday’s Child tells the story of the unique bond between a little girl and an older woman suffering memory loss. The play, aimed at children aged four years and over, was developed with input from neuroscientists at the University of Sussex, and the Alzheimer’s Society.   END_OF_DOCUMENT_TOKEN_TO_BE_REPLACED