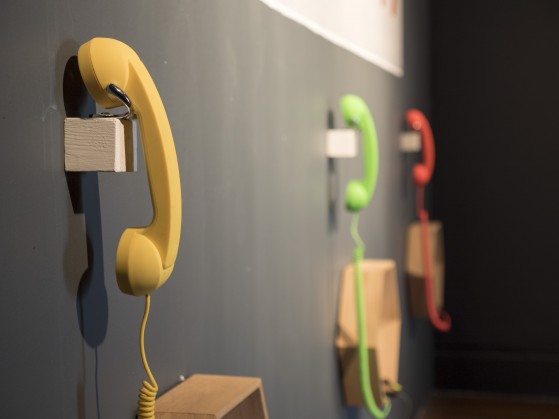 Teenagers in Temple Street worked with artist Rachel Tynan to develop the Titans, an interactive installation formed through a family of beautiful wooden figures. As the figures are moved into different combinations, they reveal sound recordings of the teenagers’ stories, from a Star Lady who heals to a transforming cheeky Faun. The Titans will tour to Garter Lane Arts Centre in Waterford City.

Radio/Silence, developed by artist Eszter Némethi and teenagers in Cork University Hospital, is an interactive radio game that alters the hospital environment for the listener. Using mobile phones, listeners can help the characters save the world from an evil doctor intent on spreading silence. This radio game will tour to teenagers in University Hospital Waterford in partnership with the Waterford Healing Arts Trust and will also be available to access at Garter Lane Arts Centre.

Mary Grehan, Arts Director of the Waterford Healing Arts Trust, said: ‘We’re delighted to host Radio/Silence at University Hospital Waterford for the teenage population. We are struck by the ingenuity of this art project which draws from youth culture, uses technology young people are comfortable with and, significantly, can be accessed by the teenager in the bed, reflecting the playfulness and innovation that is Cloudlands.’

The Cloudlands project was developed by Helium Arts, the children’s arts and health organisation, as an artist residency programme connecting artists with teenagers in hospital through collaborative projects. Running since 2013, Cloudlands has been specifically designed for teenagers who have to endure long hospital stays, often in wards with much younger children and with little creative stimulation. Through the Cloudlands tour, new audiences both within and beyond the hospital will discover the imaginative worlds of teenagers in hospital.

Mary Grehan, Arts Director of the Waterford Healing Arts Trust, will launch Cloudlands in Garter Lane Arts Centre on Thursday 31 March 2016 at 6pm and all are welcome. The exhibition will continue at Garter Lane until 9 April 2016. For further information see www.garterlane.ie

The Cloudlands National Tour is visiting arts venues and hospitals across Ireland until June 2016. Cloudlands is accompanied by a series of free events for artists, schools and medical students at participating arts venues. For tour information visit www.helium.ie

Helene Hugel, Artistic Director of Helium Arts, said: ‘Helium Arts’ National Cloudlands Tour highlights the inspired work that can emerge when teenagers collaborate with an artist in hospital. The essence of the Cloudlands project is to provide teens in hospital with a voice and a place to be away from their illness and medical routines, a place where they can be a teenager.’
Artist Rachel Tynan said: ‘It was important to the teenagers that their stories reached beyond the walls of the hospital, that people outside of the hospital world learned about their work. The stories describe moments of magic, of transformation and escape. These stories are housed in the beautiful simple forms of the wooden Titans that were created for us by the Dublin Woodturners. We invite the viewers to get a slice of what Cloudlands is like, to move the Titans, to discover their secrets and to create their own stories.’

Artist Eszter Némethi said: ‘Radio/Silence is an amalgamation of stories and game ideas, suggestions, plots and characters gathered during my residency at CUH. I mostly worked with each young person once and my role was to try weave together the stories, propose ideas and create a daisy chain-like process where everyone could add, transform or, if they liked, ignore my proposal and go in a totally different direction. Working physically in a hospital also had a mark on all the stories because reimagining the room, the ward or using the space was often the starting point, giving the young people the freedom to invent but also a fixed and shared context that helped to knit everything together.’
The Cloudlands National Tour by Helium Arts is funded by an Arts Council of Ireland Touring and Dissemination of Work Award. Cloudlands in Waterford is taking place in partnership with Garter Lane Arts Centre and the Waterford Healing Arts Trust.

Rachel Tynan graduated from the National College of Art and Design (BA Art and Design Education) in 2009. She recently completed her Masters in Design, examining the effects illness has on the human body through textile, sculpture and body art. She exhibited Soar Saor as part of The Ark’s Awakening Curiosity exhibition (2012) and her solo exhibition Cut Throat at The LAB (2012) pushed her work beyond the fixed manifestations of installation with an explorative dance performance which further explored the experience of living with an illness. www.racheltynan.ie

Eszter Némethi is a theatre maker and holds a BA in Drama and Theatre Studies from UCC. She has a special interest in collaborative performance making in various contexts. Her work centres on “real” non-actor performers and collaborators, strongly defined spaces and a special attention to the audience’s experience and engagement. Over the past year, Eszter has been exploring the use of game-mechanics and interactivity in her work. Eszter is the artistic director of Makeshift Ensemble and director of the company’s productions to date, Exit Strategy (2013), No One Can Hear You In There (2012) and Osteoporosis (2011). She is also curator of the multi-disciplinary arts event Quarter. www.makeshiftensemble.com

Helium Arts is a children’s arts and health organisation transforming the healthcare experience of young people and those who care for them through art, imagination and play. Established in 2009, Helium’s creative projects take place in hospitals, health centres and community settings across Ireland. www.helium.ie

View the Cloudlands film by filmmaker Siobhan Perry, screening at arts venues throughout the tour: https://youtu.be/5ndYY5PfXZY