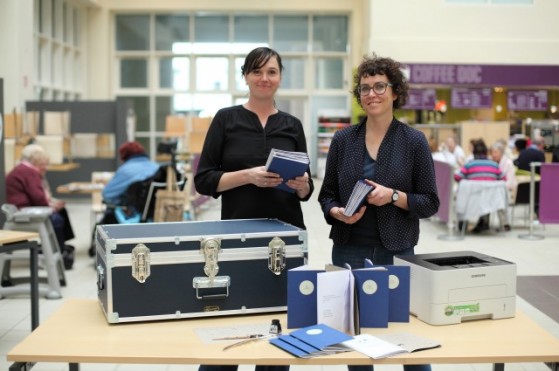 Tiny, Kind Gestures is a collection of haiku poems created by patients during their dialysis treatment and will be launched in the Cardiac Renal Atrium at Cork University Hospital on Wednesday 2 November 2016 at 5pm. These reflective three-line poems are presented as a limited edition handmade within sight of the ward by Haiku Island Press. Staff, patients and visitors participated in an open workshop run by artists Tess Leak and Orlagh O’Brien in October.

During the summer months of 2016, Tess and Orlagh collaborated with 24 patients to make the haiku which often evoked the natural world. The artists discovered haiku making is particularly suited to a healthcare setting in that the process could be non-invasive, flexible and gentle. This poetic form engaged the imagination and inspired a connection with the present moment. The artists also found that bringing the contemplation of nature into a clinical environment seemed to support an atmosphere of calmness and creativity.

“I’ve never written anything in my life, before now!” (Participant)

The 92 one-to-one conversations on the ward began with the patients and artists’ goal to make a poem together. It took on a life of its own however as some patients started writing at home, on an iPad, in the garden and travelling to and from the hospital.

“It’s uplifting to know that the patients have achieved something they never would have dreamed of.” (Joanne Lyons, Acting Clinical Nurse Manager of the Dialysis Unit)

The title of this collection is from one of the poems and reflects a reoccurring topic of conversation: the deep appreciation by the patients for the ongoing kindness shown to them by the staff during their three hour dialysis sessions, three times a week, every week.

every year the same

swallows come to nest by our