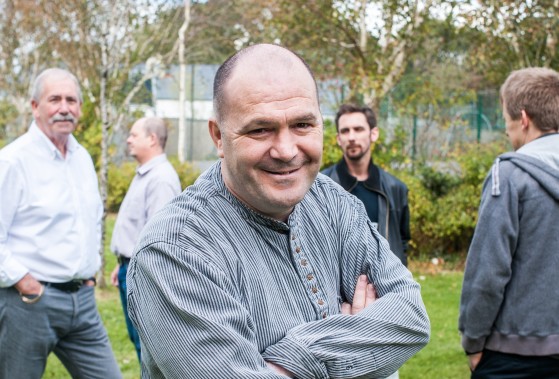 James O’Flynn and his band Claddagh Rogues have battled their fair share of demons to consistently produce passionate music rooted in their troubled lives. Born out of Cork’s Simon Community, which cares for the homeless and those at risk, Claddagh Rogues have been going strong for nearly 10 years and will release a new vinyl album this January. ‘For the Record’ will be launched with a live performance as part of Cork’s inaugural First Fortnight festival on Saturday 14 January at 1pm in Triskel Christchurch.

James and Mags Kelly started Claddagh Rogues during an artist-in-resident project at the Cork Simon Community in 2007, led by musician and clinical nurse Kevin O’Shanahan who specialises in mental health and the arts for Cork’s mental health services. Kevin, who plays with the band, said a project designed to explore creativity, build confidence and self-esteem has grown to be so much more: ‘The group’s writing has the energy and vibrancy of life on the edge. It has been a privilege to work with people who have experienced and overcome a lot of pain in life and see how much music and the opportunity for creative expression means and helps people cope with challenges like addiction.’

James, 44, spent most of his early life in prison, under psychiatric care and homeless on the streets of Cork. Fellow Claddagh Rogues founder member Mags Kelly experienced addiction and homelessness. The new album pays tribute to Mags, who passed away in 2014, aged just 44. Talking about the album, James said music continues to keep him on the straight and narrow: ‘Some tracks will pay special tribute to Mags, other will have a fresh meaning after her passing. I had no idea things would go this far. I’m the last original member of the Rogues. I have a house, a son and I want to be there for him as a father. I feel proud of myself and my family are happy too. They have been on the journey with me too. I have been a messer all my life. Things are looking up.’

The Dublin-born First Fortnight festival challenges mental health stigma through the creative arts. Held in the capital since 2013, this is the first time the event has stretched south to Cork, creating open discussion and understanding of mental health problems, whilst challenging prejudice and discrimination.

Claddagh Rogues will perform songs from ‘For the Record’ during First Fortnight Cork as part of Rebel Rhythms, a free daylong event of music, spoken word, visual art and mental health discussion on 14 January. Singer-songwriter John Spillane will join Claddagh Rogues as a guest performer on the day. For booking information visit firstfortnight.ie

‘For the Record’ will be the first release on MusicAlive Records and will be available on 14 January 2017 from iTunes and as a limited-edition vinyl album from musicalive.ie. In 2008, Kevin O’Shanahan established MusicAlive with another musician, Caoimhe Conlon, to develop the inclusion of music and creative activities in mental health and community settings. Caoimhe also plays flute with Claddagh Rogues.