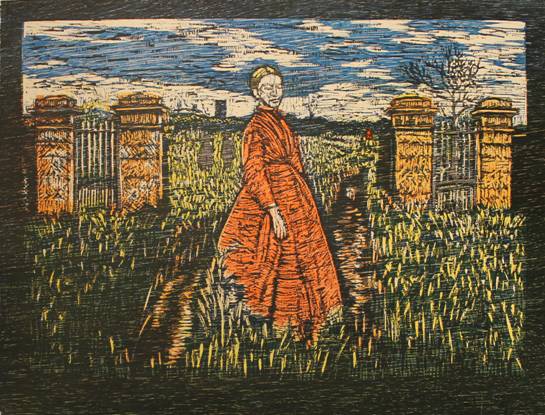 In August 2016, Galway Print Studio was selected to represent Ireland at Euro Celtic Art 2016, part of the 46th Festival Interceltique de Lorient in Brittany. The exhibition, entitled Imagining Galway, featured the work of 13 artists from Galway Print Studio and celebrated the status of Galway as a place of creativity and imagination. Thanks to Galway University Hospitals Arts Trust and Arts Director, Margaret Flannery, Imagining Galway will be displayed in the Arts Corridor of University Hospital Galway from 17 February to 20 April 2017.

The 46th Festival Interceltique de Lorient, which took place from the 5 to 14 August 2016, is a celebration of Celtic culture. It showcases the rich Celtic tradition in music, dance, the arts, artisan crafts, gastronomy and sport from Brittany, Scotland, Ireland, Cornwall, Isle of Man, Wales, Galicia, Asturias, Arcadia, Cape Breton and the entire Celtic diaspora. Each year, the Festival attracts more than 750,000 visitors over 10 days.

Galway Print Studio’s participation in Euro Celtic Art 2016 was a clear indication of the strong cultural links between Lorient and Galway, where in, September 2015, President Michael D. Higgins and the Mayor of Lorient, Norbert Métairie, celebrated the fortieth anniversary of the twinning of the two cities.

Imagining Galway will be launched on Friday 17 February at 5pm on the Arts Corridor of University Hospital Galway. All are welcome.