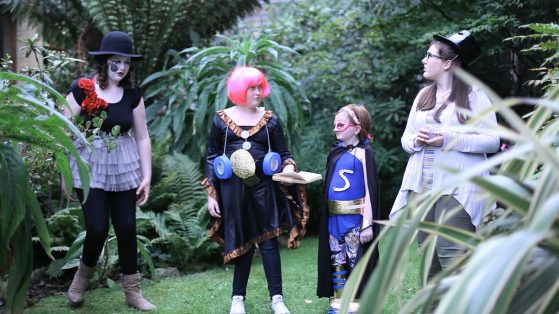 Helium Arts and CanTeen Ireland are hosting an interactive film and music showcase at The Sugar Club in Dublin on 1 April. This event will feature the premiere of Planet of the Capes by members of CanTeen Ireland, the young people’s cancer support group, together with companion films by Louise Manifold and poet Ben Murnane, live music by Seán Carpio with CanTeen and superhero activities with artist Siobhán Clancy.

This is a FREE event but booking is essential: https://www.eventbrite.ie/e/planet-of-the-capes-tickets-32024402851

Seán Carpio is a multi-instrumentalist whose practice incorporates song, sound and improvisation. Seán is collaborating with the young people to create a soundtrack for the event which will be performed live with CanTeen members.

Siobhán Clancy, lead artist on Helium’s community film project, will curate a series of interactive installations inspired by sets and characters from Planet of the Capes. Siobhán will also perform the role of a projectionist creating a live visual ‘mash ups’ show.

Louise Manifold, visual artist and experimental filmmaker, is creating two short companion films with Ben Murnane and Seán Carpio inspired by Planet of the Capes and the imaginative approaches of the young people. Louise collaborated with CanTeen members on creating the green screen sequences for their film.

Ben Murnane, writer and poet, is creating a poetic piece as part of a film collaboration with Louise Manifold. An adaptation of Ben’s youth memoir, Two in a Million, about life with Fanconi anaemia, kick-started Helium’s film project in 2012 and Ben has been a project mentor since that time.

Planet of the Capes is funded by the Arts Council and Dublin City Council Arts Office with support from Flying Tiger Copenhagen.