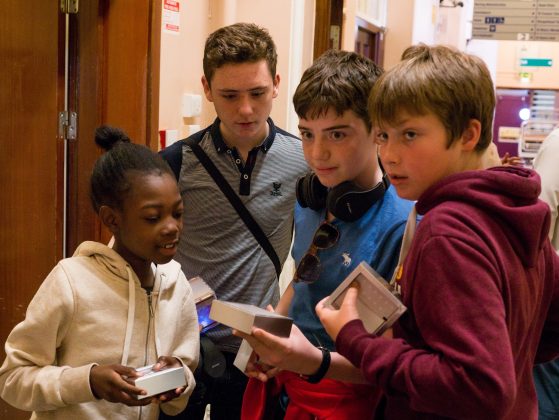 Young people, their families and staff at Temple Street Children’s University Hospital took part in an interactive game event on 13 June 2017. Temple of Treasures was designed by teen patients with artists Siobhán Clancy and Rachel Tynan and the hospital’s Play Department. The event forms part of the Fireflies project developed by Helium Arts to support teenagers transitioning to adult health services.

The content for the game was constructed by weaving imaginative concepts developed by patients working with the Fireflies artists-in-residence. A key priority in the creation of the game and the rules of engagement was that these were placed in the hands of the teenagers, promoting their independence and decision-making skills in an environment in which they often have little control.

Space exploration emerged as the favourite theme amongst participants so Temple of Treasures consists of portals in and out of other sci-fi worlds layered onto a typical children’s hospital.

The game is played with the ‘Firefly’ cube, a custom-made device with sensors that activates light and plays audio files when touched. The ‘Firefly’ was created with the support of Make Create Innovate.

In the mobile version, the cube navigates participants through the hospital where they meet performers playing different roles. The teenagers incorporated elements of their hospital experience into the game, with characters such as Nebula, inspired by the nebuliser used in treating asthma, and Dialysis, inspired by the haemo-dialysis machine used to filter blood. A bedside version of the game was also designed for patients whose mobility is limited.

The experience of young people transitioning to adult healthcare is a core focus of the Fireflies residency. By creating an interactive treasure trail within the architectural and social framework of a hospital, the artists aimed to offer young people the chance to explore creative ‘way-finding’ skills that might resonate with their own journeys through change.

Learn more about the Temple of Treasures game and the Fireflies project here.

The Fireflies project by Helium Arts has received three-year funding from the BNP Paribas Foundation through the Dream Up Programme with additional funding from the Arts Council, Dublin City Council, HSE Lottery funds and other sources.