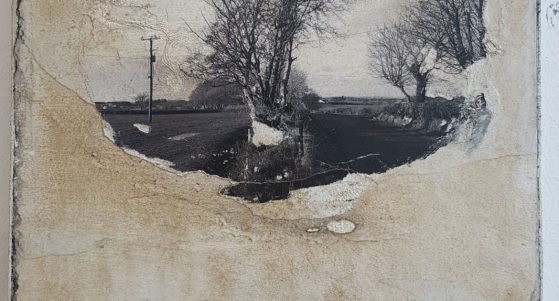 Old Haunts, a solo exhibition by Michael Wann, is running at Hyde Bridge Gallery, Sligo from 24 April to 15 May 2018. Over several months, Michael visited with older people in health centres across County Sligo, sharing his work and having conversations.

Initially, he thought he would make work connected to their lives and the stories they told him; instead, he started to journey back to the places where they had once lived. He describes an afternoon on the bog road near Lough Easkey, searching for the house of a man who had lived there. ‘I couldn’t find his house,’ he says, ‘and I suddenly realised I was on the wrong track. That wasn’t the point.’ It wasn’t about individual stories. On the road the telegraph poles just end, and that image profoundly expressed the isolation and experience of living in a remote place. The story was already embedded in the place.