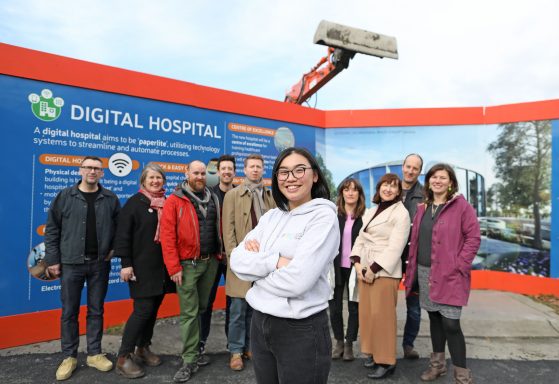 Eight artists have been selected as part of the Children’s Hospital Group Public Art Programme to develop innovative artworks for the public spaces surrounding the new children’s hospital and the two new paediatric outpatients and urgent care centres at Connolly and Tallaght Hospitals. The artists were chosen following a highly competitive open competition.

The programme is being implemented as part of the new children’s hospital project, a landmark healthcare development for Ireland and the single largest capital investment in healthcare in the history of the State. The project will transform how paediatric services are delivered in Ireland.

All of the proposals have been conceived with a view to creating a child-friendly environment in the public areas of the new children’s hospital and the two paediatric outpatients and urgent care centres, including the waiting areas, the entrances and concourse areas, the parking areas and the ‘frieze’ – the base of the garden on the fourth floor of the new children’s hospital, which forms a continuous single storey around the building’s perimeter.

During a 12-week research and development process which took place last year, the artists had the opportunity to learn about and respond to the hospital plans. They also gained an insight into the experience of being a child or young person in hospital from members of the Youth Advisory Council* and were inspired by the many gardens and other play areas that will feature in the new hospital.

During the four-year construction period of the new children’s hospital, there will be other calls to artists for expressions of interest for other areas of the hospital, including the clinical areas.

The Children’s Hospital Group Public Art Programme will be jointly funded by the Per Cent for Art Scheme and Philanthropy.

*Youth Advisory Council is a group of young people who share their experiences as users of hospital services in order to improve the care children and young people receive in the three paediatric hospitals in Ireland. YAC also feed into the design and delivery of services in the planned new children’s hospital on the St James’s campus, Dublin 8

Jason Bruges Studio: This London-based studio practice is internationally renowned for producing ground breaking works that sit between the world of architecture, installation art and interaction design. It was established by Jason Bruges, a multi-disciplinary artist and designer who trained as an architect and is passionate about creating pieces that engage people with their environments. An experienced team of architects, artists, lighting designers, industrial designers and visualisers as well as specialists in electronics, programming and project management come together at Jason Bruges Studio to deliver the work.

Rhona Byrne: An Irish artist based in Dublin who graduated from NCAD with a Degree in Sculpture in 1994. Through her sculptures, Rhona creates environments for and in response to specific contexts which encourage social interaction.  Her work is in the collection of The Irish Museum of Modern Art, Fingal County Council, Facebook, Microsoft, Beaumont hospital, NUI Maynooth, The Rollercoaster society America and a range of private collections. She is also an educator and facilities art workshops with adults and children.

Róisín de Buitléar:  Róisín is one of Ireland’s foremost glass artists and has been working in that medium for over 30 years. Her work has been exhibited across Europe, the United States, and in China and Japan. In 2018, she is artist in residence at the National Museum and her exhibition, entitled CAUTION! Fragile Tradition in Transit, will has been on display at the National Museum since the 8th March.

Remco De Fouw: ARHA graduated from N.C.A.D in 1991 and has been working as a full time professional artist since then. His work can be seen in public spaces throughout Ireland and abroad including Quintessometry at University Hospital Waterford and Perpetual Motion, located at the turn off for Naas on the M7 motorway, which he produced with artist Rachel Joynt. He also lectures in sculpture and photography in IT Carlow.

Martin Healy: Living and working in Dublin, Martin works predominantly through the mediums of photography and video and his works have been shown widely both nationally and internationally. His work has appeared in numerous solo exhibitions such as A moment twice lived, Crawford Art Gallery, Cork, 2016 and Terrain, Galway Arts Centre, 2015 as part of the Galway International Arts Festival.

Vera Klute: Born in Germany in 1981, Vera has been based in Dublin since 2001. Her work has been exhibited widely in Ireland and abroad and is part of both private and public collections, most notably the Portrait Collection of the National Gallery of Ireland and the National Self- portrait Collection. In 2015 Klute won the Hennessy Portrait Prize at the National Gallery and was awarded the Hennessy Craig Scholarship at the RHA 185th Annual Exhibition, 2015. In 2017 her work appeared in a major solo exhibition at the Royal Hibernian Academy.

Ian Wilson; Composer Ian Wilson was born in Belfast and has written over one hundred and fifty music compositions which have been performed and broadcast on six continents. He is a member of Aosdána, Ireland’s State-sponsored body of creative artists and in recent years he has been AHRB Research Fellow at the University of Ulster, An Foras Feasa post-Doctoral Research Fellow at Dundalk Institute of Technology in Ireland and Composer-in-Association with both California’s Camerata Pacifica ensemble and the Ulster Orchestra.

Gareth Kennedy. A sculptor, Gareth has produced and shown work both nationally and internationally. His art practice to date includes public art work, educational projects, exhibitions, residencies and collaborations. In 2009, he co-represented Ireland at the 53rd Venice Biennale along with artist Sarah Browne. He draws upon the social, cultural and economic histories of a place in making new work which often results in architectural structures, films, hand crafted objects and live events.