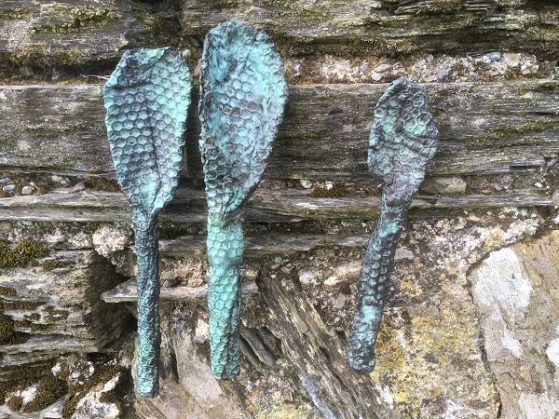 110 Skibbereen Girls, a year-long project exploring the poignant story of 110 girls from Skibbereen who escaped famine for Australia in 1848, will culminate with the unveiling of a bronze sculpture which will incorporate some Sydney Sandstone donated by the Australian Embassy on 20 July 2018. Artist Toma McCullim began the process with a studio residency at Uillinn, West Cork Arts Centre, followed by a residency on the site of Skibbereen Workhouse, now Skibbereen Community Hospital Campus, collaborating with staff and residents.

The residencies gave time for Toma to research and develop her ideas and support a number of public interactions to include tours, talks, film screenings and participatory workshops, all investigating the theme of the 110 girls, their journey to Australia and the diaspora that exists now.

The Earl Grey Famine Orphan Scheme, named after the Colonial Secretary who enacted it, had two main aims: to reduce overcrowding in the workhouses through an assisted emigration scheme and to send female immigrants to settle in Australia where at the time there were nine men for every woman. The Board of Guardians in every Union put forward the names of suitable girls, aged between 14 and 18 years of age. Skibbereen Workhouse offered the most girls of anywhere outside Dublin – 110 girls. The young girls recruited for the scheme were expected to work as domestic servants on arrival in Australia, until they reached an age to marry a suitor.

Life was hard but there were opportunities. Many of the women went on to live till very old age, having on average nine children. The girls did not necessarily have to be orphans, but for whatever reason, were no longer living with their families. They were to be of good character, unmarried and with no children, so that there were no encumbrances to marrying Australian settlers. It is estimated that there are at least 10,000 descendants of the girls.

Staff and residents working and living at the Hospital Campus collaborated with Toma to make 110 wax spoons which are being cast in bronze. The project is due to conclude in July with the installation of the bronze cast spoons. Each spoon will signify one of the girls and together they will be embedded into the walls of the old workhouse, as a lasting sculpture, near the famine burial ground on the Skibbereen Hospital Campus.

‘The project has really ignited imaginations and encouraged lots of people to share their own stories and connections to the time.’ – Mr Richard Andrews, Australian Ambassador to Ireland

This project has been managed by Justine Foster at Uillinn West Cork Arts Centre where the work will be launched alongside ‘Coming Home: Art and the Great Hunger,’ an exhibition of historical and contemporary artwork from Ireland’s Great Hunger Museum, Quinnipiac University, Connecticut, USA.

110 Skibbereen Girls will be launched by Mr Richard Andrews, Australian Ambassador to Ireland, with music performed by Skibbereen Hospital Choir.