This month’s spotlight is on ‘Same as it ever was’, an inter-generational music project initiated by Prof. Rónán Collins, a Consultant in Age-Related Health Care at Tallaght University Hospital, and produced in collaboration with composer Ian Wilson.

Prof. Rónán Collins, Consultant in Age-Related Health Care, and Ian Wilson, composer, have been involved in a number of arts in health collaborations at Tallaght University Hospital including the well-received ‘Bewitched’, a narrative of stroke in music.

Same as it ever was

‘Same as it ever was’ was a project conceived originally from an observation at the kitchen table that reminiscence with YouTube was an enjoyable, educational two-way communication between children and their grandparents, leading initially to the REMPAD reminiscence project.

It became obvious in this digital ‘ear-bud’ era, where the ‘family stereo’ is no more, that neither generation might actually hear or know much about the other’s music, missing an important opportunity for inter-generational cultural education and communication through the love of music. But was this actually true? Wilson and Collins invited two secondary schools, urban and rural, to take part, with students and their grandparents independently sharing their musical favourites and the reasons why. They postulated the generations might like different genres and styles, but the reasons particular pieces were important would probably be the same. Hence ‘same as it ever was’, a nod to the Talking Heads song of Collins’ and Wilson’s own generation that they would have shared with their own children.

From these sessions with students and grandparents, common themes of ‘loss’, ‘nostalgia’ and ‘being unique’ came very much to the fore as to why a particular piece of music was important to both groups. These themes and some comments were sent to poet Helen Pizzey who created five lyrical poems to reflect these themes, around which Wilson composed songs for the beautiful jazz voice of Dublin’s Lauren Kinsella with Chris Montague on electric guitar and Conor Chaplin on double bass. In addition to exploring these themes, however, it was hoped the project would encourage inter-generational communication about music, and so it transpired from chatting to students and their grandparents, when they visited again to perform the pieces at the schools. 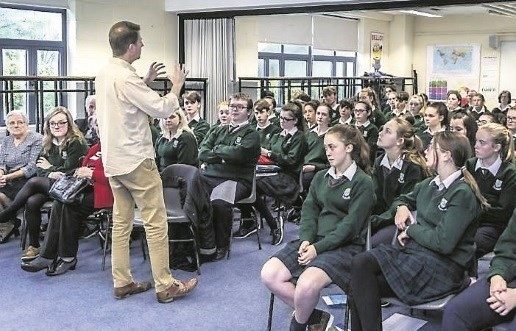 Bringing the generations together through music

One of the key outcomes was a chance to explore personal musical favourites in a peer setting and discuss why pieces were important to you, whilst also seeing what another generation likes and why, creating a new mode for communication and cultural education between the generations.

‘Same as it ever was’ was also an important opportunity for students interested in music to see how a creative composition process happens and a chance to chat with the composer and musicians.

‘Same as it ever was’ is available on CD on a ‘not for profit’ basis through Contemporary Music Centre (€5 incl. p&p of which €1.63 will go to the Meath Foundation charity, a key sponsor of research and arts in health):
https://www.cmc.ie/shop/same-it-ever-was