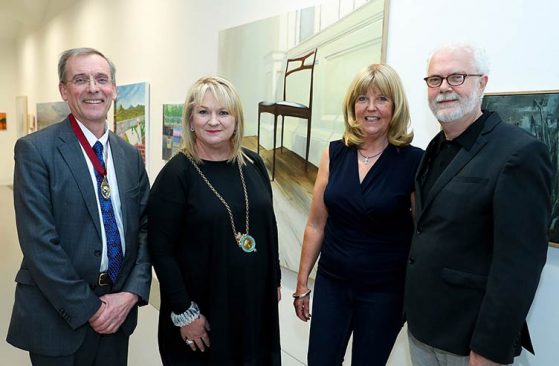 Mary A. Kelly has been announced as the winner of the 2019 RCSI (Royal College of Surgeons in Ireland) Art Award for her artwork, ‘Add and subtract the marks, poke my fingers and even my head all the way through’. Now in its fourth year, the RCSI Art Award in association with The Irish Times was established in recognition of the connection between art and healing.

The artwork was selected from more than 500 works that are on display at the 189th Royal Hibernian Academy (RHA) Annual Exhibition which opened to the public in May and continues until 10 August. As part of the prize, the winning artist will receive a commission for a new work to be displayed on RCSI’s campus.

The award ceremony was opened by Abigail O’Brien, President of the RHA. The prize was presented by Mr Kenneth Mealy, President of RCSI at a ceremony which took place in the RHA.

‘The RCSI Art Award is a celebration of the common heritage of the RCSI and RHA and the long-standing association between art, medicine and wellbeing. We are delighted to present the fourth annual prize to Mary Kelly. We now look forward to working with the artist to create a new work for the RCSI campus that will inspire and spark a sense curiosity and wellbeing in our students and trainees while they develop as future healthcare leaders in RCSI.’ – Professor Cathal Kelly, Chief Executive, RCSI

Mary Kelly is a contemporary Irish artist and filmmaker. She graduated from the National College of Art and Design with an MA in Fine Art followed by a Degree in Film from the Dun Laoghaire College of Art and Design. She also holds a BA in Philosophy and Psychology from UCD. She is intrigued by the notion of home and place and how people instinctively strive to recreate a personal space in even the most extreme environments.

The successful artist is awarded €5,000 and the RCSI silver medal and also receives a commission to the value of €10,000 for a new work for the RCSI collection.

All works of art, in any medium, selected for the 189th RHA Annual Exhibition were considered for the RCSI Art Award. The other shortlisted artists were Taffina Flood, Joy Gerard, Vera Klute and Jennifer Trouton.

The RCSI Art Award was established in 2016 to celebrate the common heritage of RCSI and the RHA and the long-standing association between art, medicine and wellbeing. Both RCSI (1784) and the RHA (1823) have Georgian origins and are 32-county bodies with educational roles. RCSI was occupied, while the RHA was destroyed in the Easter Rising of 1916 and the RCSI Art Award was established to coincide with the centenary of these historic events.

For further information on the RHA Annual Exhibition visit rhagallery.ie