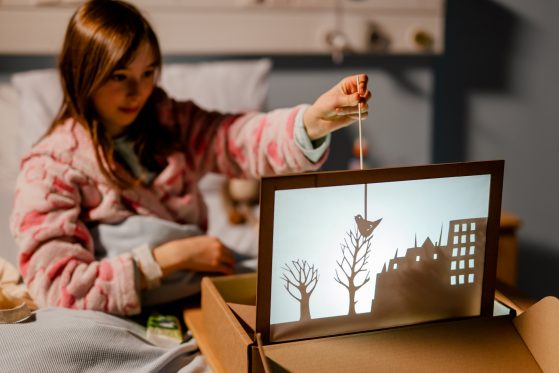 This April, Saolta Arts and Galway 2020 European Capital of Culture, in partnership with Saolta University Health Care Group, launched the third and final phase of A bird at my window and other stories by Sarah Fuller and Manuela Corbari. This project forms part of The Deepest Shade of Green arts and health programme.

Following a residency at University Hospital Galway which engaged young patients and their families in participative art workshops and intimate bedside performances, the artists have developed a shadow box theatre and a suite of online resources in response to the access issues posed by Covid-19.

Embracing the opportunity to playfully reimagine their project based on their experiences, and maintaining the integrity of their in-person engagements, they share an enchanting collection of tales where the natural and human worlds intertwine, inspired by the Italian children’s book, Nine Stories About Love.

Melding puppetry, storytelling and shadow-play in their performances, the artists’ found that sound was key to achieving immersive, transformative experiences where one parent said that their child ‘forgot where she was, she was so invested in the story‘, and another that ‘it captured her imagination and took her mind of her operation‘. Making their stories and soundscapes accessible via the Saolta Arts website therefore became an important part of the project’s final outcomes.

However, the artists decided not to go fully digital with the delivery because, as Manuela observed, ‘we felt the children and families being makers as well as audience was an important aspect of our development phase‘. Sarah added, ‘We were thinking “how can we make something that’s tangible – physical – that they can make their own and that they can do something with, and create from, based on these stories?” It needed to be real, it needed to be physical and intimate, like sharing a book with your child.‘

This beautiful short film by Tom Flanagan captures the essence of the project:

Margaret Flannery, Arts Director of Saolta Arts, remarked on the project’s impact, ‘A bird at my window and other stories is an exciting opportunity to share the Galway 2020 cultural experience widely while also helping Saolta Arts make important steps in establishing an Arts and Health programme at each site, creating future opportunities for patients, staff and artists. I envisage it will help our colleagues in recognizing the value of Arts and Health, creating long term benefits to health, wellbeing and cultural access for the whole hospital community.‘

Designed to enable creative, family-led play in paediatric wards, where children and adults can perform for each other without the artists being present, each theatre comes in a bespoke tote bag with a seed-paper postcard which can be planted in the ground when the children leave hospital. Together they will form a keepsake and a reminder of the more positive aspects of their hospital experience. As one parent said, ‘We’ll bring nice memories from the hard time in hospital.’

The audio stories together with a printable template of characters from the stories (for the wider public to begin their own adventures in shadow play) are available at https://saoltaarts.com/stories/a-bird-at-my-window/

A bird at my window and other stories is part of an overall programme of exhibitions and specially commissioned artworks for Galway 2020 European Capital of Culture titled The Deepest Shade of Green, which explores the importance of connecting hospitals with the natural world and of listening to and learning from those who use them.