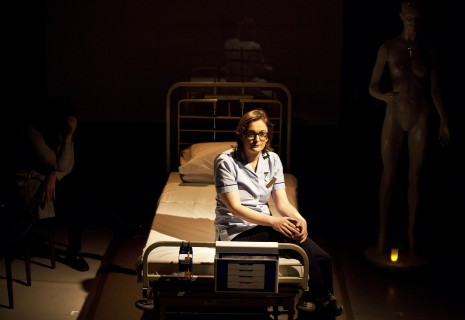 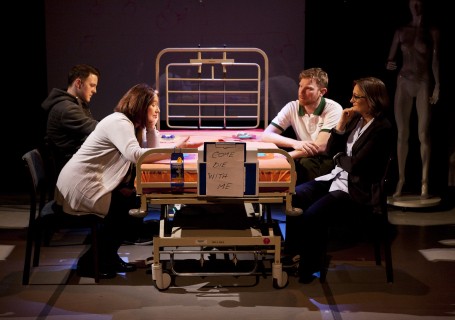 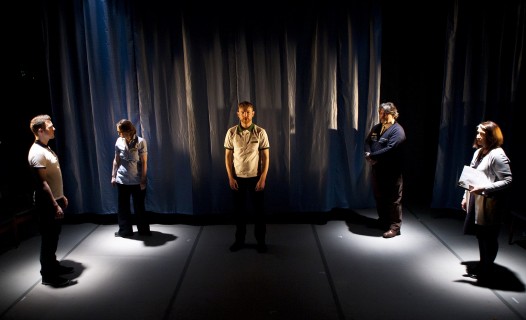 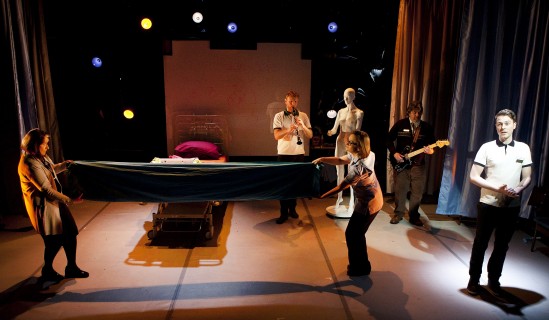 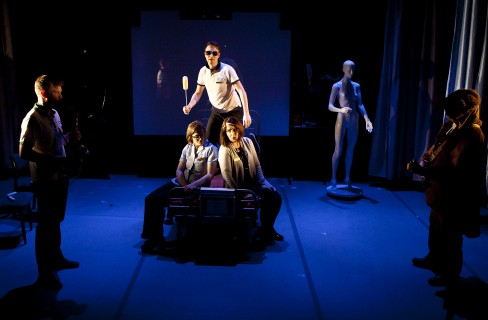 CARE is an investigation into the ethos of palliative care and the people who work in palliative care. It is a piece of theatre produced by WillFredd Theatre, and developed with the company, artistic collaborators and Irish hospice staff over a period of 14 months from 2012 to 2014.  CARE uses live music, movement, text and design to bring the audience through the daily life of a hospice.

The primary aim of CARE was to demystify what people perceive hospice to be and to promote hospice as a place which adds life to days, if not days to life.  We learnt about the modern Hospice Movement, led by Dame Cecily Saunders, and explored her theory of Total Pain: pain that is not just physical, but emotional, social, and spiritual. “You matter because you are you, and you matter to the last moment of your life.”

We wanted to truthfully represent the people who work in palliative care, ordinary people doing extraordinary work, who so generously invited us into their work life for over a year.

WillFredd's work comes from integrating ourselves in a community.  Our main concern throughout the process was to maintain ethical engagement with the palliative care community and to ensure our collaborators’ experiences were as positive and rewarding as our own.

CARE resulted from the integration of director Sophie Motley and designer Sarah Jane Shiels into the working lives of palliative care workers over the course of 14 months.  We began by visiting the canteen, getting to know the staff and allowing them to become comfortable with us.  We attended courses and conferences in palliative care.  After a few months, we were able to hold more specific conversations with the staff, and interviewed doctors, nurses, care assistants, occupational therapists, physiotherapists, alternative therapists, chaplains, volunteers, porters, and security staff.  We maintained an artistically open working environment throughout the process.

We then took our research into a development week with performers, musicians, choreographers, designers and a dramaturg. The result of that week was a 20-minute work-in-progress showing in the hospice for staff and our colleagues. We conducted a feedback session with the staff after the showing, and over the coming months returned to the hospice with more specific questions based on the responses from the showing. We took this further research into another development week, and again showed the resulting work-in-progress back in the hospice, getting more feedback.

Out final stage was a collation and rehearsal period, bringing all ideas together and creating a super-narrative (a timeline of admission to death), within which CARE was created. Music, movement, text and design all developed concurrently. For example, we employed the Bobath technique used by physiotherapists as the basis for a movement piece, which had a live score and lighting design.

One scene was inspired by a story we read about a doctor at a dinner party. He had received shocked reactions to the news that he worked in palliative care. The story was humorous and fictional but when we asked the staff about their experiences, most agreed that the common reactions are either disbelief that someone would choose to work in this area, or patronizing deifying of this extraordinary person who does such wonderful work. “Come Die With Me” took the form of a dinner party, where each performer took it in turns to be the hospice worker, and we explored different reactions around the table. The scene was initially improvised (performers’ jobs and reactions were pulled out of a hat), and performed in a work-in-progress showing for the hospice staff. Encouraged by their laughter, we worked the scene further, and created a script from the improvisations.

While the scene provided a bit of absurd comic relief in a performance context, it was juxtaposed by the  addition of the son of a terminally ill patient at the dinner table. The light-hearted conversation became a violent food fight, inspired by a “Feelings Wall” exercise we learnt from social workers working with children. Clay, formed into different shapes during a session, is thrown forcefully against a wall, the effort vocalized loudly. We never wanted to ignore the fact that despite the laughter and hope present in a hospice, it is okay to be scared, to be sad. To be angry.

CARE premiered at the Project Arts Centre on 19 February 2014 and ran for 12 performances until 1 March 2014. CARE will return 27 May – 1 June 2014 on a tour of hospices in Dublin. The Hospice Tour of CARE will be a low-tech version of the full theatre production. There will be no major technical elements or lighting design, but the actors themselves will be performing the same script with support from props, costumes and music.

As part of our extensive marketing plan, we asked 80 audience members to participate in pre-show questionnaires. This allowed us to discover demographics covering age, gender, if they were health workers or not and also how they heard about the show.

WillFredd hosted two post-show discussions, one focusing on the artistic elements of the show, one on the medical and palliative care.

The biggest challenge was how to negotiate patient confidentiality. WillFredd’s work engages constantly with a community and, for the first time, we had to limit the access of the group as a whole to some of the information we were given. It is an interesting balance to consider when working in arts and health. Because of patient confidentiality, we asked one of the consultants in the hospice to invent a character and case study for us, and hence, our main character, Anne, came  into being. In this way, the piece was factually accurate, containing real and typical information, but it was also invented so it did not breach any confidentiality.

Artistic challenges: Where to place the patient. In the hospice setting, the patient is the focus. There have been many theatrical productions dealing with end of life care, and the patient is very often the main character. With CARE, we wanted to foreground the people working for the patient. We found that whenever we asked a performer to play the part of the patient, the focus immediately went straight to them and our intention was lost. Our solution was to use a mannequin as our patient - ‘Anne’ - an inanimate object whose importance and presence onstage was the result of the attitudes of the performers around her. She was at once their patient and their tool, she could be cared for and discarded as a prop when needed.

Through long-term engagement with the palliative care community, WillFredd created a new audience who attended the final production.

Our artistic representation received positive feedback from the medical profession. One comment at a post-show discussion is worth mentioning here. A doctor commented that what we had presented on stage showed palliative care in the context of hospice care, and her view was that palliative care is a larger ethos of care than we showed. This is a valid and interesting concern, as we as a company feel that we can only show what we experience first hand. It made us question whether we were in danger of losing the bigger picture.

Many of our audience attended due to a family or friends receiving palliative care. We gained very positive feedback from this audience demographic, many of whom found themselves very moved and at the same time surprised at how much humor was in the production.

CARE was recorded on 1 March, during the matinee performance in the Project. This recording will be made into a DVD, which will be used exclusively to promote the show to outside presenters. A trailer of the show is also available.

CARE was well-documented in Irish press with excellent reviews and a preview was shown on RTE news.  Members of the company were interviewed for RTE’s Morning Edition. One of our performers, Sonya Kelly, appeared on RTE’s Arena, where she described her personal experience of visiting a hospice to research her role.

Gemma Tipton wrote a feature article for the Irish Times: 'The Final Act, from the Hospice to the Stage.' Caomhan Keane interviewed members of the company and staff of the hospice for an article which appeared in the Irish Independent's Health and Living supplement. Eoin Lynch recorded a podcast and wrote an accompanying article entitled 'A Time to Care.'

CARE was reviewed by: