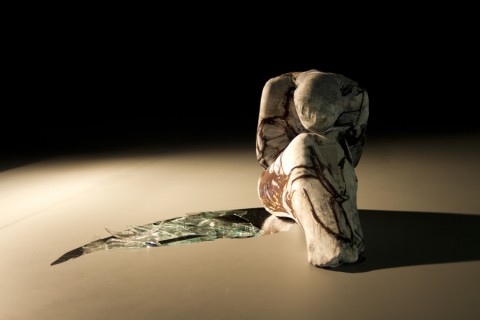 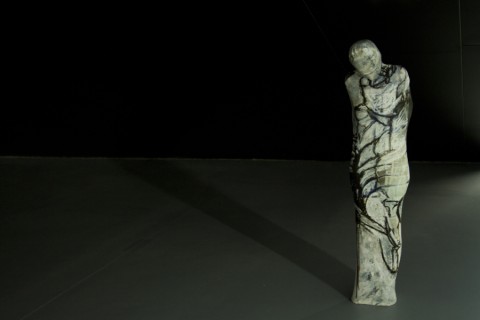 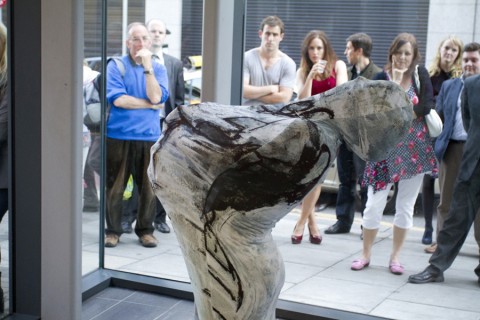 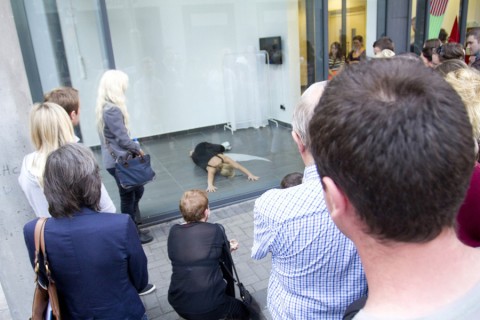 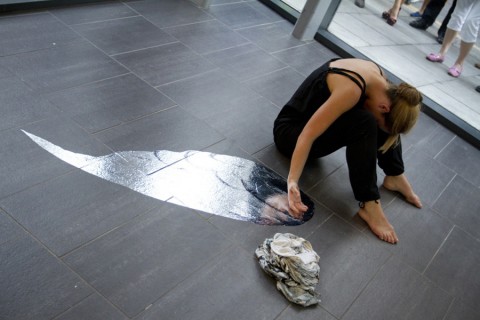 Cut Throat was the result of a two-year Research Masters in NCAD undertaken by artist Rachel Tynan which aimed to visualise living with long-term illness. The final production of Cut Throat manifested in an exhibition, performance and series of talks at The Lab in Dublin.

Cut Throat was the result of a two-year Research Masters in the National College of Art and Design (NCAD), Dublin, completed in 2012. During this time, four long interview ‘case studies’ were completed with people living with ME / CFS. These individuals were selected through articles, personal correspondence with the artist and word of mouth about the research project.

Rachel Tynan also worked with an art therapy group (4-12 participants), run by Louise Keogh via the Irish ME Trust, which became important in assessing and suggesting how to visualise the experiences of people living with ME / CFS.

The many definitions of the term 'Cut Throat' are similar to the assertive symptoms central in the lives of people living with ME (Myalgic Encephalomyalgia) / CFS (Chronic Fatigue Syndrome).* The physical restrictions imposed by illness - in particular a lack of freedom - were described by the participants and often represented through the analogy of a bird. In one example, through the clipping of wings; in another, the training of homing pigeons. The red line across the neck of the Cut Throat Finch references swollen lymph nodes, a common symptom described by many of the participants.

There were recurring themes throughout the sessions:

Through an analysis of these themes and further discussions a brief developed which gave specific imagery, colour, material and form to the work. While the artistic work was itself not collaborative, the interviews and focus groups were instrumental in informing the artist’s vision for the project.

The final exhibition and performance were presented in The Lab, Foley Street as part of Dublin City of Science 2012. The exhibition acted as a starting point for the subsequent talks on 'Visualising long-term illness' and 'Curating Arts and Health'. These talks were intrinsic to the project as a way of opening up a dialogue, fulfilling the aims of the project and evaluating the exhibition.

*At the time of research the definition of ME / CFS came from the Canadian Consensus Document by Carruthers and van de Sande.

The research project manifested as an exhibition curated by Sheena Barrett from the Arts Office at Dublin City Council. The installation was exhibited within the Cube glass-fronted space in The Lab, Foley Street and brought this work to the public domain.

The exhibition encompassed a life-size body cast of the artist wrapped with a printed jersey body stocking. The print was composed of the painted Cut Throat Finch on a background of newspaper articles relating to ME / CFS.

An exploratory dance performance was co-directed by Rachel Tynan and dancer Rachel Ensor, with Ensor cocooned within the body stocking. The piece was filmed in addition to being performed live on the opening night of the exhibition.

The research for this project was submitted as a thesis for a Research Masters at NCAD and was approved by both internal and external assessors.

The continuous evaluation of work in progress during the research phase was discussed with the participants of the IMET group and the individual interviewees.

The final evaluation of the work came through feedback after the exhibition via a comment book, emails to participants and online discussions and feedback with people living with ME / CFS.

A further exploration of the exhibition and its outcomes was discussed through the two accompanying talks at The Lab.

A final project review was submitted to Dublin City of Science 2012 on completion of the project.

The research submitted to NCAD does not acknowledge this project as a specific ‘arts and health’ work. Through further discussion with the curator Sheena Barrett, the programme around the exhibition developed. During these discussions, it became apparent that a series of talks would help to engage and inform a variety of audiences on the subject of Arts and Health.

The original brief of the project did not foresee how difficult it would be to meet people living with ME / CFS. Excluding the important work of IMET, there are few supports or structures in place for people with ME / CFS. There is rarely a chance to come together, as one participant acknowledged when she described it as the ‘hidden’ illness. The lack of understanding around this illness and the traditional stigma attached to it is still felt by many of the participants. Therefore, Cut Throat was embraced as a way of trying to challenge these issues.

It was not possible to truly assess how the interviewees viewed the final exhibition, as only one of the participants was physically able to visit the exhibition and attend the talks. However a number of other people living with ME / CFS responded to the work through emails and through the comment book. One visitor noted 'I felt a connection to the figure wrapped like a mummy.' An interesting outcome was the response of people who did not have ME / CFS but were living with a variety of different illnesses such as cancer, kidney failure and arthritis. One testament stated 'this could be me. Inspiring.' Another participant described how she had struggled to find words to explain the impact this illness had on her life and that the exhibition helped her family to have a greater understanding in this respect.

The illuminating responses to the exhibition made privately to Rachel Tynan through emails, personal contact and the exhibition comment book have informed subsequent work. The project has led the artist to develop her practice within a collaborative arts and health context and Rachel is now working with Helium as Artist in Residence on Cloudlands at Temple Street Children’s University Hospital, Dublin.

The research phase of this project was documented by the artist through a written thesis for her Master's Degree and is available through the library at the National College of Art and Design, Dublin.

The exhibition and talks were documented through photography and four accompanying videos: