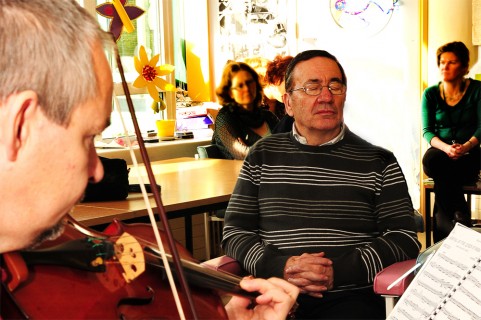 Ian Wilson, Composer in Residence in the Stroke Unit of the Adelaide and Meath Hospital in 2010, developed a new composition based on conversations with staff and patients of the unit.

The aims of the project were to:

The aims of the artist were to:

Composer Ian Wilson made ten weekly three-hour visits to the Stroke Unit. He recorded interviews with patients and staff and experienced many aspects of the stroke service including ward rounds, team meetings, x-ray conferences, and treatment sessions in physiotherapy and speech therapy.  Stroke patients were also visited in the Intensive Care Unit and the Accident and Emergency Department. Over this period, the composer’s observations, and the thoughts and feelings of participants were transcribed to form the basis of instrumental and song movements for a new composition for soprano and quartet.

Each fortnight during the project, four members of the Irish Chamber Orchestra and soprano Deirdre Moynihan gave an open rehearsal of the latest movement of the work for patients and staff in the Charlie O'Toole Day Hospital. Ian Wilson introduced each new movement and explained the background to the piece, sharing the experience or conversation which inspired it.

During these open rehearsals, the musicians and soprano also performed popular works to entertain the audience from a more familiar repertoire including Handel, Vivaldi, Bach and Strauss. Members of the orchestra introduced the music and talked with patients in the audience between playing. On average twelve patients attended each of the four sessions which lasted one hour. Patients and staff moved freely in and out of the room during the performances and their feedback and input was sought on the work.

An independent evaluation was carried out by Nicola Dunne. The evaluation methodology was qualitative. Comments were invited from key stakeholders via interviews and focus group meetings. The evaluator was also granted access to the composer’s project journal.

The report was circulated widely in arts, arts and health and medical audiences.

The key outcomes of this project are as follows:

After four open rehearsals, Bewitched, the new seven-movement composition was premiered by Deirdre Moynihan and members of the ICO in the Charlie O’Toole Day Hospital, an Age Related Unit at AMNCH, in November 2010, to an audience of patients, staff and invited guests.

The first public performance was given at a major international arts and health conference at the Royal Irish Academy on June 15 2011.

The National Centre for Arts and Health, the Adelaide and Meath Hospital incorporating the National Children's Hospital (AMNCH)