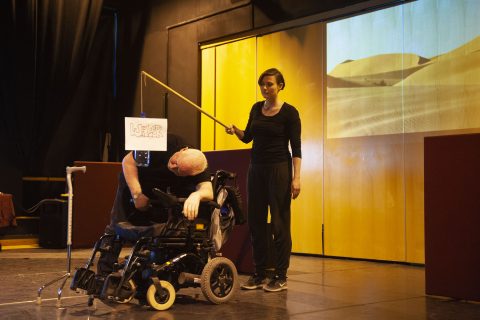 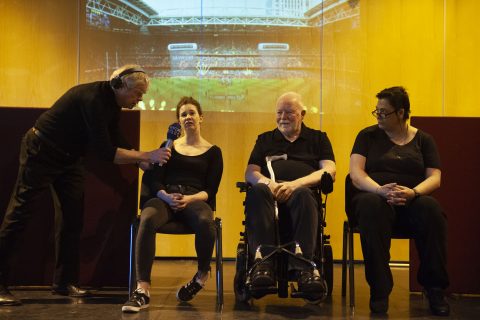 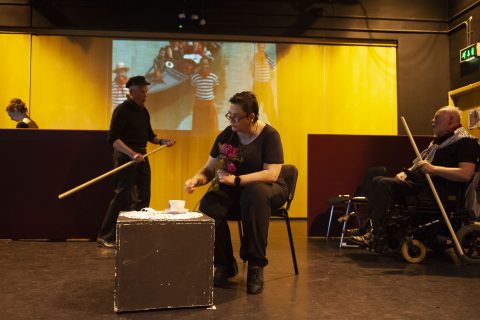 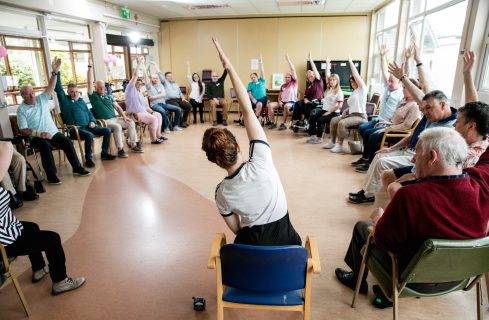 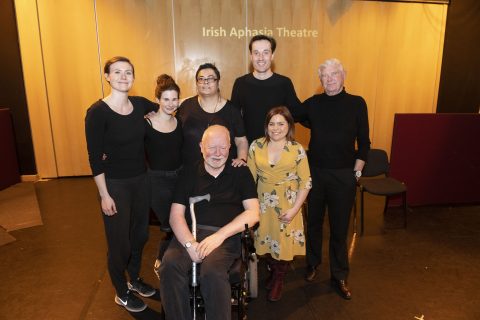 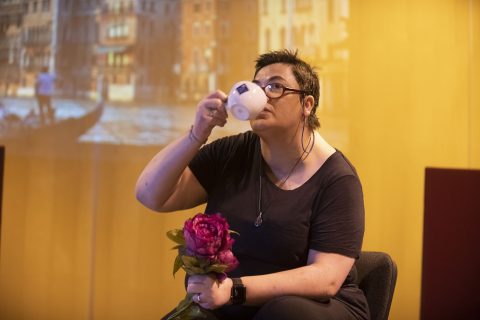 Irish Aphasia Theatre (IAT) is a socially engaged theatre and arts and health company working in professional theatre, community and health settings. IAT uses theatre to artistically engage, train, facilitate and produce the work of participants who have cognitive, communication and physical disabilities. In particular, IAT works with participants who have aphasia and/or acquired brain injuries related to ageing conditions and other brain traumas.

During September 2018 to July 2019, there were more than 20 participants and members of their families visiting and engaging on different levels throughout the project. Three consistent members who have aphasia and brain injuries attended IAT workshops every week over 10 months.

The principal aim was to establish the first Irish Aphasia Theatre Company to provide:

In 2017, training, research and a pilot for IAT began in Trinity College Dublin and The LAB on Foley Street. Gráinne ran three aphasia theatre workshops and a presentation for TCD's Speech and Language Department. The five participants with aphasia and varying brain injuries were referred via the Speech and Language Department. The feedback from participants and their families pointed to the positive impact of the theatre work and they all wanted the workshops to continue at the end of the pilot:

'This programme hugely helped [my husband] in terms of his ability to communicate. He learned to act out his feelings and emotions, which transpired to be of significant benefit to him and our entire family. His confidence improved so much that everyone he came in contact with noticed a huge change in his demeanour and personality.'

These workshops demonstrated that with our accessible performing arts designs around the complications of aphasia and brain injuries, participants were more capable of the theatrical exercises than we had imagined.

In 2018, Gráinne was chosen as one of Fingal County Council's Infrastructure programme artists. She focused her award on developing the work of IAT. Part of the award was used to travel, train and work in Montréal, Canada with the world's first aphasia theatre company, Théâtre Aphasique (founded 1994), who work in Montréal’s main rehabilitation hospital, Villa Medica, and in community and professional theatre settings.

On returning from Montréal, IAT was set up in Fingal in 2018 with funding from the Arts Council / Create Artist in The Community Scheme Award and with continued partnering and support from Fingal County Council Arts Office. Participants were recruited via promotion and referrals from local community and health organisations, with some rejoining from the TCD pilot.

Experienced collaborating artists were recruited to add multi-media layers to the work. Their monthly master classes were a valued part of the project, offering participants many access points around their individual disabilities via dance (choreographer Jessie Keenan), song (composer and singer Robbie Blake) and theatre (actor Ainé Ní Laoghaire). This enabled quality educational opportunities for participants' artistic engagement, growth, health and own artistic expressions. The artists were present at various points with the lead artist throughout the facilitation and creation processes with participants.

IAT began with an open night event in Draíocht Theatre in September 2018 with 20 guests: people with aphasia and other acquired brain injuries, their families and friends. An IAT workshop introduced attendees to character acting, vocal acting tonalities, movement and some singing, as a sample of what our weekly process is like. We also shared learning from Théâtre Aphasique and the TCD pilot. After the workshop, attendees were brought to the Dublin Theatre Festival show, HOME, at Draíocht, a socially engaged theatre performance about the lives of a cross-section of people living in the Fingal area. The aim was to immerse participants in socially engaged professional theatre from the offset, showing examples of people and stories that are outside the 'normal' narratives we are typically offered in the arts and media.

Discussions of HOME and other theatre works became our weekly workshop focus in the month that followed. We practiced elements of staging that were used in these theatre works. We also facilitated introductory theatre exercises without set performance goals e.g. uses of gesture, tableaux, characterisation, soundscaping, direction, writing exercises, movement, choral improvisations etc. to grow participants' skills as actors/communicators and creators in performance theatre.

The lead artist designed the weekly workshops based on each individual participant's strengths and their cognitive, communicative and physical access needs, in line with the introductory training she received with the TCD speech and language professor for the 2017 pilot and her training and work with Théâtre Aphasique in Montréal’s Villa Medica Hospital in 2018. Crucially, Gráinne also designed workshops around their personalities, lifestyles and passions along with input from the collaborators. Vocal and physical acting elements of theatre were focused on to take the pressure off participants using words, supported by Jessie, the choreographer, and Robbie, singer /composer. Participant ownership was key and we always allowed room for things to change in a workshop around their wishes.

As a team, we had feedback sessions after each workshop exploring how each participant was developing in terms of their health and therapeutic development and how this intersected with their artistic engagement, such as, was their communicative expression developing (e.g. their vocal clarity and projection), were they enjoying the experience, and crucially, how accessible, challenging or easy were the set exercises and group dynamics for them. This time was very beneficial to ensure the best experience for the group.

Over autumn / winter 2018, we focused on more detailed communication and performance techniques in projection, breath control, energies, stage presence, physical pictures, physical textures and qualities, tonal qualities and rhythm in voice, among others. With this work, we found new ways to communicate together in spite of the communication and cognitive challenges. After three months of developing these performative skills, we began exercises in improvisation and creative writing, soundscaping, dance and singing. Each participant began to create originally written and devised theatre pieces of their own.

In March 2019, the theatre pieces were woven into a 30-minute one-act show, performed by the participants to a public audience in Draíocht's Studio Theatre. The show was group-led and discussed throughout the winter and spring with final decisions and staging elements decided on by the lead artist for fluency. The pieces  were personal to each individual.

One participant was very taken with a Samuel Beckett play that had been introduced to the group. He identified with the character's struggle and despair and enjoyed the surreal and practical comedy elements in it. He got very attached to the character and we taught him a lot of psychological acting techniques and movement physicality work in his development and delivery of the piece.

Another participant wrote many poems during writing exercises we tried in the workshops. One love poem she wrote was particularly special to her and fuelled her performance. She imagined it was in Venice where the group scene was acted out with her building into it a reading of her own poem.

The final performer/participant was a rugby-mad fan who’d lost most of his verbal ability due to his aphasia and had to give up work after his stroke. Together we wrote a piece where he plays an RTÉ rugby pundit who's had a stroke and lost his voice, which also results in the loss of his job and identity. In his piece, we watch him go through feelings of isolation and depression only to find his voice again in the beauty of singing, which he did live on stage. The piece ended in a group choral performance.

Overall, the methodology was more challenging and labour intensive then we had anticipated but the project delivery was of high quality both artistically and in terms of accessibility. It resulted in compelling personal and artistic outputs by the participants. All three performing participants are still weekly attendees of the group and have begun to pass on their skills and knowledge to new members.

As an artist and facilitator, Gráinne Hallahan evaluated each workshop before designing the next one. She paid particular attention to how the participants' access needs were being met through each artistic challenge and how their own theatre and performative skills and knowledge were developing.

Participants were asked about their favourite exercises and which they liked least or found too difficult or boring. When collaborating artists were assisting in the workshops, there was team prep the week before and a feedback session afterwards to assess participant engagement. We also looked at how to improve on meeting participant needs and how their development through the medium of theatre (acting and creation), dance and singing was progressing. This was very beneficial in guiding the group work to more enriching artistic engagements and therapeutic goals.

Gráinne organised quarterly coffee meetings with each of the participants to see how they were getting on and what they’d most like to do next, which also supported the participant-led ethos of IAT. It was useful to have feedback sessions both within the group and in non-group scenarios to allow people to express themselves freely.

Participants also evaluated each other's artistic work during the workshops to constructively discuss what worked and what didn't and what was most interesting to them and why.

The principal outcomes were:

A major realisation was that most of our members now have little or no access to regular rehabilitative therapeutic supports. For example, many of them have now been released from the HSE and other primary and community care rehab programmes despite their brain injuries still impacting on every facet of their daily lives and their opportunity to take part in our society. For the three core participants, our weekly IAT was the key accessible physical, communicative and cognitive rehabilitative and social outlet they now had in their lives. It was also the only accessible professional arts engagement opportunity available to them.

On a personal note, these workshops reiterated for Gráinne the empowering impact of theatre as an artform in working with marginalised groups. As a theatre artist with disabilities since birth herself, she understood the participants' enthusiasm and sense of growth in creating and performing their own work. The theatre company was giving a place for new voices.