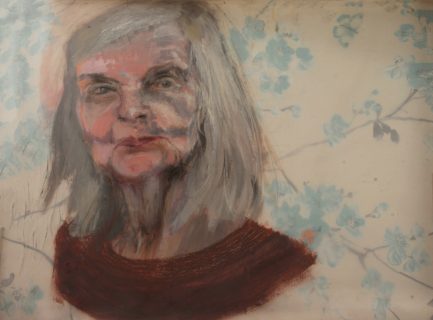 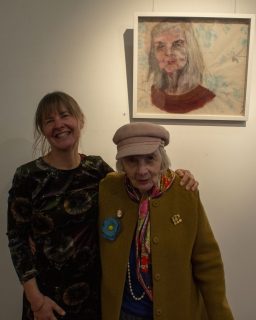 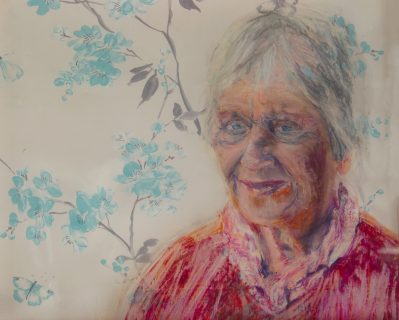 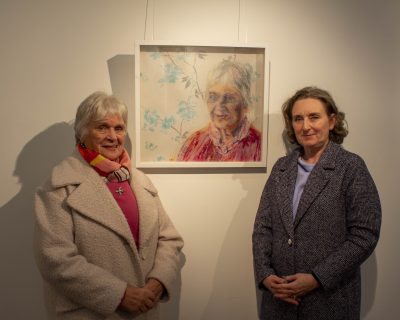 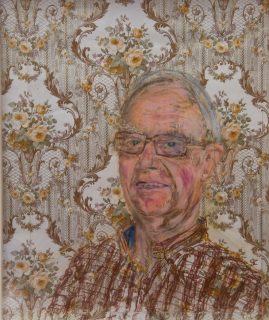 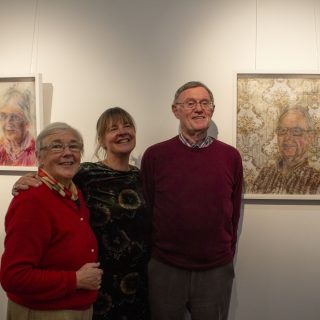 Memory is Grey is a body of work based on artist Gillian Cussen’s experience as a person and as an art facilitator with people who have some form of memory loss (and their loved ones). An exhibition of 10 portraits took place at County Hall, Cork in 2019.

I worked as an artist facilitator with older people in nursing homes and on the Crawford Art Gallery’s Lonradh programme (Lonradh is a gallery visiting programme for individuals with dementia and their carers). I knew all of the sitters and had worked with some of them for a number of years. I had built up a relationship over time with all but two relatives whose loved ones were in nursing home care.

Memory is Grey is an exhibition that resulted from my work as an artist facilitator in various nursing homes in county Cork and on the Lonradh programme at the Crawford Art Gallery and occasional sessions at the Alzheimer’s Cafe, St. Finbarr’s Hospital, Cork.

I have worked in nursing homes for ten years and am currently working in two nursing homes, Abbeylands in Kildorrery and Oaklodge in Cloyne, and came to know four of my sitters via weekly art sessions in both of these venues. I built up a relationship with the people during the simultaneously stimulating and relaxing activities of drawing, painting and making. The art sessions were very social affairs and often good fun with news and chat and scandal being shared. I had a five-month period to complete the portraits so I chose my sitters from the art group on the basis of those who expressed a wish to have their portraits completed and those I knew best. I approached the Director of Nursing who then sought written consent from relatives. Once consent forms were received, I spoke with the prospective sitter and asked would they like to have their portrait done for an exhibition. Of five people asked four readily agreed. Most relatives approached had agreed. I took a number of photographs and had already done some quick sketches and blind drawings of people over the past year or so during the weekly art sessions. People appeared to take great pleasure in being sketched and photographed.

In the case of Lonradh, which takes place monthly, I chose five sitters who regularly attended. Once I had permission from both the loved ones and the sitters I visited two people at home to do the initial sketches and take photographs. Due to time constraints I could not do home visits to the two remaining sitters so took their photographs during a Lonradh session.

I also have a very personal interest as my Mum has vascular dementia and is the tenth sitter.

I imagine memory as layers which we peel back, add to or erase from, so I employed layering as a method in the creation of the portraits. Oil pastels and graphite were the media used in eight of the works with acrylic in the remaining two. I used four layers or surfaces in each portrait bar one and allowed for space between the layers, rubbing out and adding in with oil pastel continually.

The initial layer is of wallpaper as I thought this would embed the subjects in a domestic-like situation. I drew directly onto the wallpaper in most of the portraits and followed this with a Perspex sheet on which I drew again in graphite. I used Perspex sheets as I wanted to create depth and transparency so that the viewer can see from one layer to the next and build up an image that can be viewed from slightly different angles to give a more complicated three-dimensional view of the portrait.

I wondered what it would be like for me if I forgot so I did a very quick (about two minutes) memory drawing of each of the portraits and used this as my final layer.

The Memory is Grey exhibition took place at Cork County Library HQ, County Hall from 4 - 21 November 2019. Some of the sitters (those who were able to) attended the opening with their families. The portraits will be gifted to the sitters and their families.

Further exhibitions are planned in 2020.

There was no formal evaluation of the project. Reflections on the exhibition were gathered through a comments book.

The participants and their loved ones/family members appeared to enjoy the process of the initial drawings and photographs and the social element involved. All sitters who were able to attend the opening seemed to really enjoy seeing their completed portrait and getting their photograph taken in front of it. Valerie said, 'I was so happy about G doing my husband’s portrait… My husband likes to be noticed and he loved having his portrait done.' And Ruth claimed, 'Mom is thrilled at her minor celebrity.'

Upon reflection, the importance of building a relationship with people with memory loss became clear to me. I would not have been able to do this work if I had not known the people well, some for a number of years. It also made me aware that people with memory loss/dementia are often not valued in a celebratory way in society even though they have lived full lives and contributed to their communities. They can be in a sense, forgotten.

The following statements are from the exhibition's comments book:

'just so lovely to see… these lovely lives captured … wonderful that you know each person.'

'The exhibition title is a lesson to us all to accept and not label people with dementia.'

I found the work of Anne Basting in her book Forget Memory to be inspiring. She argues that there is too much negativity and fear associated with memory loss in our culture and that we need to adopt a more humane, accepting and compassionate approach to what is a human condition. She contends that dementia is a human story 'not an unmitigated tragedy.' I also found Oliver James’s book, Contented Dementia, helpful in knowing how to approach a person with memory loss with dignity and respect.

Documentation from the exhibition and a reflection on the work are included on my website: gilliancussenart.com

The exhibition was featured in Munster newspapers The Echo and The Avondhu.

The work was created between June and October 2019 and the exhibition took place in November 2019.