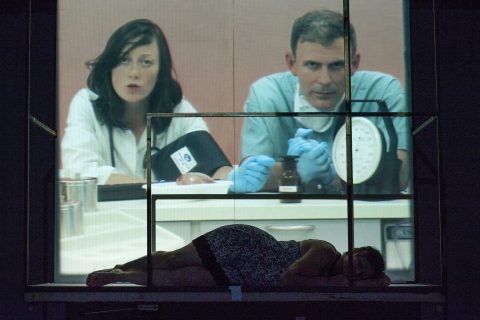 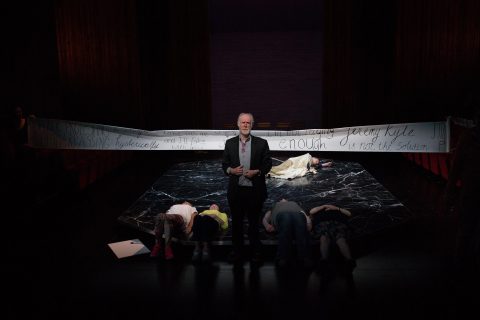 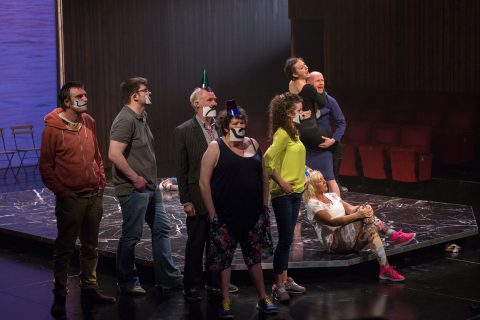 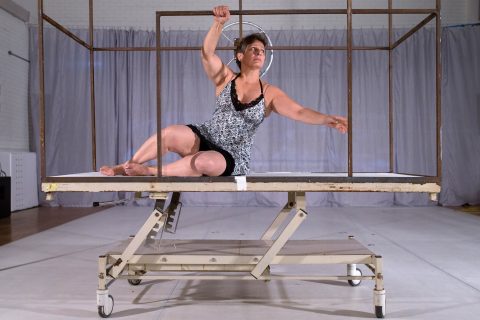 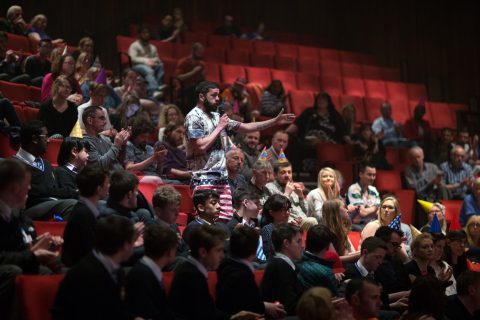 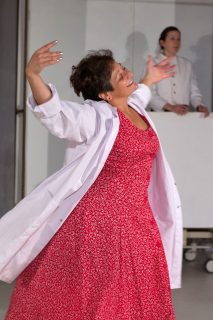 Mother Ireland is a socially engaged research and performance project led by theatre artists Maud Hendricks and Bernie O’Reilly of Outlandish Theatre Platform in collaboration with the Coombe Women and Infants University Hospital, Dublin. The project examines Ireland’s constitution against lived intersectional experiences of residents of Dublin 8, in relation to housing, migration and birthing.

Outlandish Theatre Platform has been theatre company in residence at the Coombe Hospital since 2016, based at the Rita Kelly Theatre in the hospital campus. OT Platform set out to make three productions, under the title Mother Ireland, as part of the residency: YOUtopia (2016), Megalomaniac (2016) and Womb (2019).

Participants that have taken part in the development of the three participatory performances are residents of Dublin 8’s social housing and other established and new communities, together with CWIUH staff with whom we have built a dialogical relationship through previous inter-community projects, meetings and theatre devising workshops. Our audiences are also regarded as participants and are both new local diverse audiences as well as more established arts audiences.

‘Discovering, re-framing and birthing ideas on people, place and citizenship in contemporary Ireland.’

The performances have developed in three phases:

Research Phase: The artists have adopted deep research methods, qualitative interviews and conversations documented anonymously with local (community) and hospital participants, as well as experts and scientists in relation to the relevant themes. Literary desk research is also included in the research phase. The R&D process is organic and long-term with regular evaluation of the material by participants and our professional team of designers.

The invitation to community participants to take part in performance development is communicated through built networks with community organisations, regeneration boards, postering and leafleting, and direct communications with individuals.

For Project WOMB, for example, we interviewed an obstetrician and midwife of the hospital as well as four community members about space in relation to the womb and processes of urban development. These interviews are documented. The participants are asked for their perspective on the concept for our project as well as to provide their inside into the daily operations of working in a maternity hospital. The participants’ perspectives thus become an integral part of the project outcome.

Concept development for performance: This is led by artists and the creative design team through reflection of the found research material, followed by the writing of the performance blueprint by Maud Hendricks and Bernie O’Reilly with input from health and societal experts. Through sharing of the blueprint drafts with participants we receive ongoing feedback and through devising workshops the project is shaped in content and performance language.

YOUtopia was then presented on the Abbey Theatre main stage to an invited local Dublin 8 audience and audiences directly affected by the housing crisis in collaboration with Dublin Simon Community and regeneration communities in Dublin 8.

Inspired by Brecht’s Mother Courage and Her Children, and developed from qualitative interviews with a new Irish citizen, a Syrian woman of Palestinian origin who lives in Dublin 8, Megalomaniac ran for seven performances to a local and arts audience as part of Dublin Fringe Festival 2016 at the Rita Kelly Theatre.

The final installment, Womb, is currently in development. Womb is inspired by Kafka’s Metamorphosis and has been developed through qualitative interviews with a medic, midwife, drug dealer, a person recovering from addiction, launderette owner and a builder in Dublin 8.

'Woman in form has always been the same. Woman’s welfare has been dictated by the regime that she lives in.'

Womb is a surrealist performance, exploring birthing and women’s rights in a near future. In a dystopian world - Dublin 100 years from now - home sharing has become the mandate. Democratic dictators rule and technological advancements impact on the physical and mental health of woman and healthcare providers. Created and performed with community participants and professional performers, Womb creates a parallel perspective on woman and society.

Womb will be presented as part of Europe’s Mental Health Arts Festival 2019, delivered by First Fortnight Festival in Ireland, for seven performances starting on 14 January 2019.

The Mother Ireland master projects are public events in which our locally developed audience meets a traditional arts audience. Through vox pops and post-show discussions audience responses are captured and documented. Responses to both process and outcomes are captured from performers, hospital staff and experts.

The work of OT Platform has been studied by Dr. Charlotte McIvor, Lecturer in Drama and Theatre Studies at NUIG, and included in papers, conferences and intensives.

Dr Charlotte McIvor of NUIG has witnessed and reflected on the work of OT Platform in papers and publications:

'Their work fits most resolutely within what I have termed "intersectional interculturalism", a "strand of new intercultural criticism and performance practice" which "foregrounds how an individual’s constellation of identity factors results in crucially differential legal and political statuses within national/international regimes of intelligibility, particularly for migrants and/or minority ethnic subjects."

This dimension of OT Platform’s practice also helpfully pushes on new theatrical interculturalism and intercultural dialogue to accommodate practices and processes that may stray “off topic” in pursuit of the same convictions: transformation, accommodation and inclusivity.

Outlandish’s Megalomaniac does provide one strong working model for combining local and international community and professional partnerships with an intersectional feminist approach to theatremaking that prioritises migrant and minority ethnic female perspectives in form and content. Following their lead (and insuring the support of their ongoing work) is one direction I think we need to pursue more broadly.'

'Perhaps it was the vision of a man in a skirt on the stage of the Abbey Theatre combined with the memory of the Plough and the Stars' riots in 1926 and Lynn's comments about the potential power of electoral protest and the poignant narratives of individuals on the stage and in the audience that made me think today of Rory O'Neill's Noble Call on the very same stage in February 2014 and how the content and symbolism of that speech energised a social justice movement.'

'To hear people tell their stories in response to the play is something that has made real impact on me.'

The hospital community has engaged through:

Based on our experience over the last three years of working in the hospital, we discovered a strong interest in the arts from the medical staff and management, leading to enthusiastic engagement as audience members at our performances as well as an interest in participation in the research phases. The fast-paced nature of this women and infants hospital and healthcare workers’ full schedules make regular and continuous engagement difficult. In conversation with the Health and Wellbeing Committee we are marking out activities that can happen inside the hospital, without adding more pressure to healthcare workers. As we are based at the Rita Kelly Theatre, inside the education centre behind the main hospital building, we are one step removed from the hospital’s direct activities. This is an important aspect for engagement as the platform functions as a place for reflection, making and discussion.

The performance research and development phases are documented by the artists in a private blog log.

Each performance is documented by both video and photography.

A radio documentary special edition on the work of Outlandish Theatre Platform and the Coombe Hospital is in development by Tom Roseingrave.

Hendricks was granted an Arts Council Bursary Award in 2018 to document and establish her practice within a framework of the urban Sublime and ‘theatre of ruins’. Seeking alternative documentation and evaluation methods for OT Platform’s master projects Mother Ireland as well as Open Theatre Practice, a process of making new work with local communities, is central to Hendricks’ research.