Parachute in the Purse 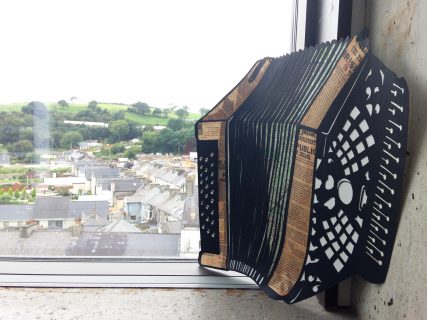 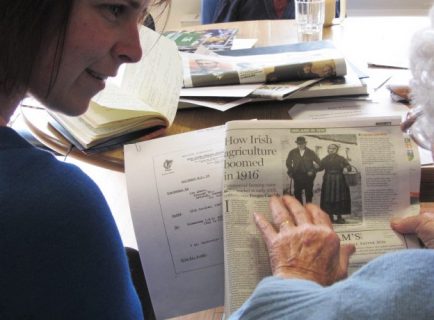 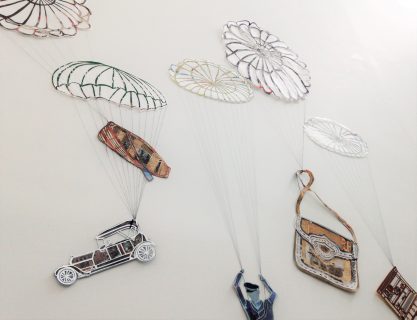 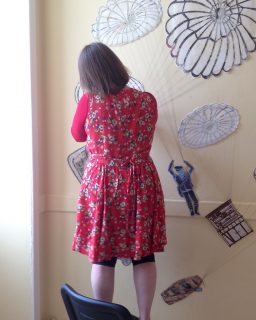 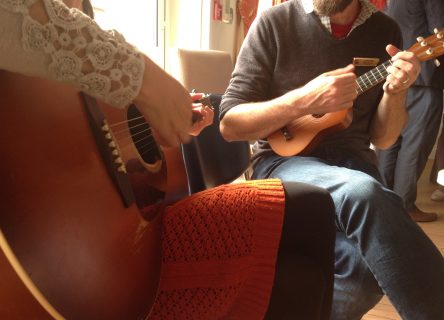 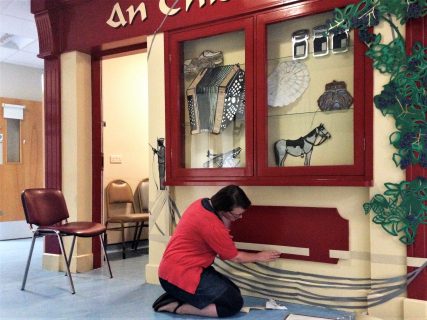 Artist Sarah Ruttle led a collaboration with artists Tess Leak, Liz Clark and Colm Rooney to ‘imagine an Ireland of the future’ with the older residents and staff of two West Cork Community Hospitals over a three-month period in 2016. The process resulted in a series of visually striking large scale paper cut-outs that reflected their conversations.

The majority of participants are resident in the community hospitals and are aged 65 years and over. Most residents are highly dependent and need signiﬁcant levels of help with physical care, including patients with increasing levels of dementia, recovering after a stroke and patients in for respite care. Staff and visitors were equally welcomed to participate and management playing significant roles in seeking locations and supporting the launch event.

Each of the hospitals already had an artist in residence through the Arts for Health Partnership Programme in West Cork: In Dunmanway Community Hospital, visual artist Colm Rooney, and in Castletownbere Community Hospital, artist and musician Tess Leak and musician singer/songwriter Liz Clark. The artist on site already knew the participants, shortening the ‘getting to know’ time with participants.

Visual artist Sarah Ruttle proposed to work collaboratively with staff and residents in Dunmanway and Castletownbere Community Hospitals to imagine the Ireland of the future as it might have been imagined 100 years ago in 1916; unfolding their vision of the future, for themselves and their families past and present.

Exploring this concept through key themes of people and place over six workshops, hospital residents were invited to retell their stories of how 1916 affected their families and their communities.

The aim was to produce a number of large-scale site-specific paper cut-outs that would be positioned in key locations at each hospital as part of the 1916 centenary commemorations.

Artist Sarah Ruttle has a significant interest in collaborative practice and ethics, and was keen that each participant's voice was portrayed with honesty and integrity. She made her process clear for all involved at the outset. Her approach aimed to create a space that welcomed all the diverse residents of the hospital, inclusive of those living with dementia and stroke, and respite patients. The intention was to engage and be responsive to their specific needs.

Sarah visited each hospital three times, gently inviting conversation, stories and song. The processes centred on conversation and song. With the use of visual cues and music as a starting point, there was a connection at different levels. Songs passed down through generations were shared ranging from 'Foggy Dew' to 'Que Sera Sera' and poems by W.B. Yates such as ‘Sixteen Dead Men’ were also shared; each examined for their meaning, context and influences. Working alongside the artists on-site in each hospital, who already knew the participants and knew their backgrounds, lent a richness and depth to the dialogue.

Using 1916 as the starting point in Dunmanway inspired stories with direct connections to the events of this time and links to family lost in the First and Second World War, alongside those of community spirit through the years. However, in Castletownbere, the unfolding of the project was impacted when a participant questioned, ‘Why go over it again, all that pain?’, during a conversation about the impact of the Easter Rising. With some participants not wishing to revisit the pain and hurt of 1916, their conversations turned to the importance of community, with the focus on their personal lived experience.

Conversations varied from the dedication of a postman who would row out every day to Bere Island in all weathers (if the weather was very bad he had use of a motor boat), to the father who was a local mechanic and went to fix the outboard engine of Sir James of Bantry, to the digging of the roads beyond Dunmanway to get the news through. Something that echoed through each conversation was how important the strength of the community was and is.

One lady whispered to me during our first workshop, 'I’d have a parachute at the back door in my purse', and hence the title of the art installation was born.

This dialogue then became the basis for the artwork for each hospital which was made during a three-week artist residency by Sarah Ruttle in Uillinn: West Cork Arts Centre. Sarah’s studio and collaborative practice are intertwined, supporting each other.

A parachute theme ran alongside significant elements of stories mentioned during the creative exchanges. Parachutes were visually portrayed, made using recycled newspaper articles featuring events of the past 100 years, card and thread. Sarah created these large-scale visual elements using paper cutting techniques and installed them in the two participating community hospitals from September until December 2016, with each hospital celebrating the installation of these works as part of Culture Night 2016.

Sarah made a third installation which was exhibited in Uillinn: West Cork Arts Centre representing the Arts for Health Partnership Programme’s work in this project.

Sarah kept a reflective journal throughout the hospital visits. For the residency part of the project, West Cork Arts Centre provided a feedback evaluation form and regular review meetings were held with Justine Foster.

The infrastructure of the Arts for Health Programme supported an inspiring and creative exchange which lent to the natural development of the project. Exchanging thoughts on collaborative ethics and boundaries in the project's approach between artists added to growth in the creative conversation. Responding to each session in participating hospitals through the residency work was thought-provoking and refreshing for artist Sarah Ruttle’s practice.

There was real intrigue amongst staff, patients, families and friends about the large-scale artwork in the hospital space. This created further considered conversation about the impact of the arts on the hospital environment. The installation in Dunmanway Community Hospital was displayed in and surrounding a shop front built within the corridor space. Using this space drew in staff and patients' interest and helped to inspire staff to consider what might be possible for future installations. In Castletownbere, the installation created curiosity about the project and impacted on the staff so well they asked for an extended exhibit time.

Cork County Council’s ‘Ireland 2016’ initiative for the National Centenary Commemorations gave ‘Parachute in the Purse’ the opportunity to be part of the national celebrations. No other Centenary programme contained as many events by local community groups. Artist Sarah Ruttle remarked on how the ancient Irish tradition of meitheal where a group comes together and works together for a common purpose was clearly evident throughout the project.

Artist:  'What is it like for you when we come into the ward and ask you questions about your life?'

Josie: 'You are full of life and cheerful in yourself.'

Artist: 'The stories you share are extraordinary and intriguing to us.'

Josie (smiling, seems amused): '... That was just the way it was, it’s nothing to us…[but] we understand that you don’t understand ... everybody is learning something new every day.'

'Parachute in the Purse' appeared in a publication 1916-2016 Commemorating the Centenary in the County of Cork, which was supported by Cork County Council funding.

The project will be shared through www.artsforhealthwestcork.com when the website launches in September 2017.

During Sarah’s artist residency she gave public updates on the project through her Instagram and Facebook accounts.

An overview of the artist’s residency at West Cork Arts Centre can be viewed here.

West Cork Arts Centre is supported by the Arts Council.

The Arts for Health partnership gratefully acknowledges the local support towards the programme with special thanks to West Cork Older Peoples Network and Friends of the Day Care Centres.