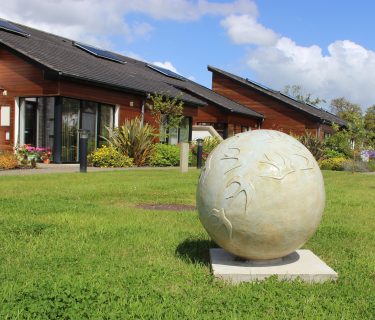 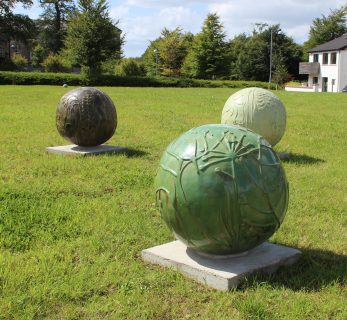 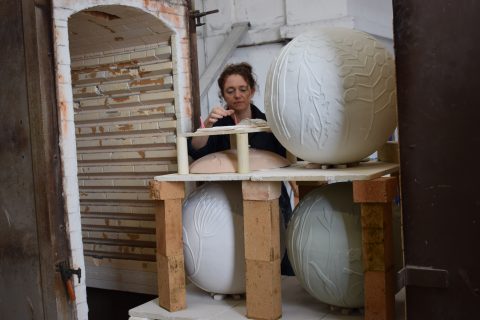 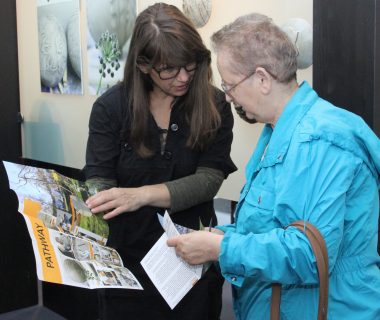 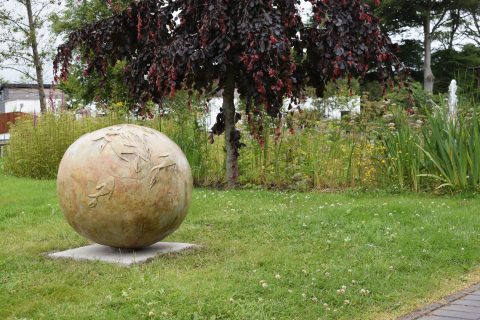 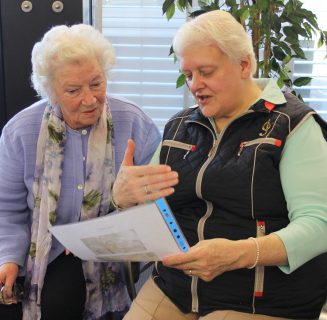 Pathway is a collaborative Per Cent for Art commission between residents of Nazareth Care Village in Sligo and artists Catherine Fanning and Brigitta Varadi. Twelve sculptural ceramic artworks were designed and made for the grounds of the Care Village.

The project took place over a ten-month period in 2016 and 2017. The design and the concept for the work is the cycle of life, directly inspired by the Care Village garden and the changing of the seasons. The overarching theme is broken down into four headings: Spring, Summer, Autumn and Winter.

The designs and imagery for each sculptural piece were developed from creative sessions with the Care Village Group. During these artist-led sessions, conversations led to imagery that the group saw as representing different stages of nature, seasons, life cycle, growth and community. The sessions were used as a means to get to know the village residents and gave them the opportunity to ask questions, share stories, have an input into the visual imagery and site location of the sculptural works.

Activity Co-ordinator Clare Lynch looked after the relationship between the artists and the residents. Due to mobility, health and other commitments, not all residents attended our creative sessions. To make sure all residents were fully aware of the commission and the details surrounding it from site location of the sculptures to the imagery on the sculptures, Clare took notes and photos during each creative session which were later sent around to all the village residents.

The artists rented a ceramic studio from Leitrim Sculpture Centre. The main structure of the sculptures was cast from plaster mould which the artists made themselves. The imagery was added from stencilled clay pieces which were attached to the main structure and worked on to refine the imagery. The work was first bisque fired, glazed and then fired a second time to a very high temperature. Such a high temperature glaze firing made the work suitable for outside use. Peter Fulop, the support ceramic technician, assisted with the technical side of working with the clay and plaster moulds and with the install of the work.

The sculptural works are a moment in time captured through image, colour and pattern that hold images embossed and in low relief on clay surface.

The sculptural work responds in a sympathetic manner to the grounds. The village community and the contemporary structure of the new buildings provided a wonderful opportunity to collaborate and create. The sculptural work is an integral part of the architectural composition and surrounding environment which presents a visual impact to the viewer and has a strong identity with the site.

A visit by older village residents was facilitated. The work bench in the kiln room had a display of work ranging from one fired disk piece and one large unfired piece. There were also samples of test glaze pieces and a selection of the plaster models that were made to cast the disk and sphere sculptural shapes. The artists' studio included a lot of the made and unfinished sculptures and on the studio walls there was a random collection of visual imagery.

Photographic Exhibition on process: May - August 2017

This exhibition showcased the interaction and journey the project had taken. Part of the Bealtaine Festival, the exhibition included an opening reception and artists talk on 26 May.

The exhibition was a collage photographic display showing the full process involved in the making of the artwork. Images from the creative sessions with the village residents, day-to-day making in the studio, kiln loading, plaster mould making and visual diary work were included. These were also areas covered in our artist talk with the aid of a visual power point. Village residents also attended the artist talk day and added to the conversation and answered questions that came from other audience members.

During the five days of the install, residents frequently came and asked questions and admired the work. We also had a lot of interaction from care staff and village family and friends. As there was an ongoing dialogue with residents during the commission, when it came to the install residents already had ownership of the artworks.

An A3 folded publication gave an overview of the project including the background and process; site history; quotes from participants, artists and the Care Village's activity co-ordinator; and images of the process, studio work and sited finished work.

The project included ongoing evaluation of the creative process and interaction with Nazareth Village residents and Clare Lynch, the activity co-ordinator, during creative session work.

There were also conversations throughout the project on commission theme, design, colour, siting of work with residents, the Nazareth Housing Officer, the Housing Association Body and the Public Art Officer.

Public artist talks enabled reflection on the process as a whole.

Through the creative session workshops, studio visit, photographic process exhibition, artist talks and visual presentation, the Nazareth Village residents felt they had a real connection and ownership of the commission. At every stage of the commission there was an open dialogue between all parties involved: artists, residents, technician, the activity co-ordinator, Housing Officer, Housing Association, Pastoral Care Officer, Public Art Officer and Leitrim Sculpture Centre.

'It was a real pleasure to collaborate with such an enthusiastic, energetic group such as the Village residents. The creative engagement from the residents was a key aspect of the success of the commission.' -  Catherine Fanning, commissioned artist

'A collaborative project brings its own challenges and opportunities to expand one’s own knowledge and skills. Very grateful to able to work and learn from ceramic artist Peter Fulop; his vast knowledge in ceramics provided endless resources and skills for this project and for us to learn from.' - Brigitta Varadi, commissioned artist

'The project gave residents a platform to share other things from life cycle to life memories. Already, we are seeing that involvement in this project is impacting on residents’ lives and thoughts in other ways.' - Clare Lynch, activity co-ordinator

Residents from the care village offered their thoughts, which were recorded during creative session workshops:

The Department of Housing, Planning and Local Government Per Cent for Art Scheme managed and administered by Sligo County Council Arts Office in partnership with Nazareth Housing Association