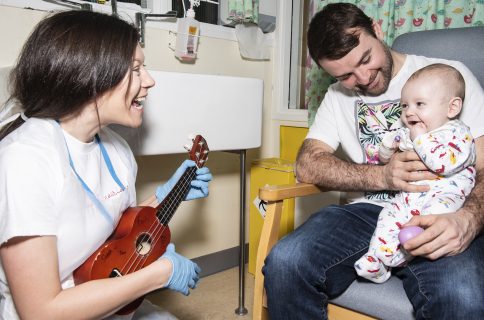 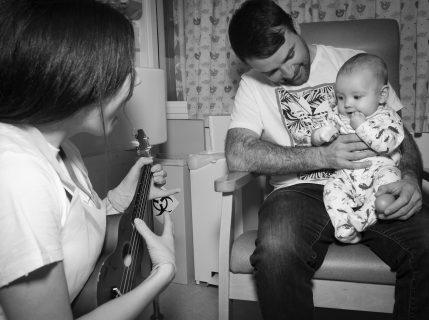 Soothing Sounds is a music project that took place in the Children’s Hospital Ireland (CHI) at Tallaght University Hospital. Musician in residence Sophie Lee conducted interactive bedside music sessions with patients on Friday mornings for 20 weeks between September 2018 and March 2019.

Soothing Sounds built on the success of annual music projects that have been running in the CHI since 2011. These projects were led by musician in residence Mairead O’Donnell (2011–2018) and coordinated by the National Centre for Arts and Health, TUH.

Babies, toddlers and children who were inpatients on Maple Ward, Oak Ward, and the High Dependency Unit in the CHI at Tallaght, along with their family members/visitors, participated in the project. In each case, the patient was staying in an individual room which he/she was unable to leave.

The Play Therapists in the CHI identified suitable patients. The Clinical Nurse Managers (CNMs) and both clinical and non-clinical ward staff supported the project and, on occasion, participated in music sessions. Alison Baker Kerrigan and Clara Monahan from the National Centre for Arts and Health developed and oversaw the running of the project.

Every Friday morning for 20 weeks I met with the Play Therapists (PTs) in the CHI at Tallaght. Together we identified suitable patients and the PTs informed me about any conditions or circumstances that I needed to be aware of. They also highlighted patients that they felt would particularly benefit from a music session, or who had requested a session. I then went from room to room, introducing myself and the project, visiting as many of these patients as possible.

The nature of each session varied hugely, depending on the age of the patient, their reason for being in hospital, and their previous musical experiences. The CHI is an acute setting, meaning that I likely would not have met the child and their family before, and so relationships were formed in-the-moment through music. Typically, I sang nursery rhymes and lullabies to the babies and their parent(s)/guardian(s), accompanying myself on a ukulele and distributing percussion instruments for them to shake/tap/play along. I played and sang more interactive songs with the toddlers. I produced a wide range of colourful percussion instruments and encouraged them to engage in musical play and to use the instruments to respond to, or accompany, the songs. For example, we would create sounds of thunder and raindrops on the tambourine when we sang ‘I hear thunder’.

I catered my repertoire to suit each patient, responding to their mood, and to their reactions and engagement with the music. I also improvised with some patients and engaged in musical conversations with them. It was clear, for example, that one two-year-old boy in the HDU loved to bounce and dance to music, so I chose mainly upbeat, lively songs, and the session was full of fun and laughter. However, another patient aged six was drawn to the different sounds of the percussion instruments. She built a ‘drum-set’ on her bed out of the different instruments, and we improvised together, the patient absorbed in creating rhythms and sounds.

Where possible, I talked to the patients and their families about their favourite music and played requests. However, as well as singing familiar songs, I introduced songs from other countries and cultures, and different musical genres. I also gave the older children the opportunity to play and learn some chords on the ukulele. Sometimes, clinical members of staff would ask me to conduct a music session to distract a patient during an uncomfortable procedure or to get them into a suitable position to be examined. On these occasions, the staff frequently joined in with the singing which the children loved.

I encouraged any parents/guardians or family members present to join in the sessions too, which many did, although a few took the opportunity to have a well-deserved break. The sessions often stimulated a natural dialogue between me and the parent(s) about their child, their child’s condition/illness, and/or what the experience had been like for them.

I concluded my visit to the hospital each week with a music session with Jack*, a young boy who was an in-patient living in isolation for most of the project’s duration. These sessions were really special. Although our music sessions followed the same structure each week (beginning with the same hello song, concluding with our goodbye song, and involving percussion and song), I similarly adapted the musical material depending on how alert and present he was that day.

Three separate evaluation forms were distributed to parent/guardians, staff members, and patients (in accordance with their age), respectively, after the music sessions over a four-week period. All evaluations were anonymous. They sought to understand the participants’ experiences of the music sessions and how the service could be improved.

The musician in residence also kept a non-identifying reflective journal throughout the project.

The response to the project was overwhelmingly positive.

The main benefit identified by parents was a transformation in their child’s mood. The sessions provided an opportunity for patients to smile, laugh, and release energy. They became happier and more relaxed over the course of the sessions.

‘It lifted her mood; allowed her to release frustration’

This was similarly reflected on the five-point happy-sad Likert scale completed by patients.

Clinical staff members noted a variety of positive effects including:

‘Very calming effect on children and their parents’

‘It calmed the patients and assisted me to carry out some interventions more easily.’

‘One child was traumatised by the hospital experience and was wary of staff. The music replaced the worry with a happy experience.’

Notably, no negative effects of the service were captured from patients, family members or staff, and the main improvement suggested was to run the sessions more often.

‘The service was great. Very interactive. I don’t think it could be improved upon.’

‘The service is great as it is. We would love to see it continue. More hours would be amazing.’

Other suggestions for improvements centred on the potential for greater staff involvement and the opportunity for music to continue in the room once the musician had left.

Some notable benefits recorded by the musician included:

‘The experience of seeing their children enjoy live music can be quite cathartic for parents and provide the opportunity for emotional release. For example, one parent burst into tears upon seeing her baby, who had been extremely ill, smiling and wriggling along with the music.’

‘One of the doctors was so kind as to stop me in the corridor to let me know that a child had clinically improved after a music session, and similarly the nurses have made a point of telling me when they notice a visible positive difference in a child following our session, which I really appreciate. It has also been lovely to chat to members of staff that are interested in the role of music in healthcare settings, and to discuss the physiological and psychological benefits that it can have.’

‘Each week I would encounter the inevitable hurdles associated with working as a musician in an acute hospital setting. For example, the patient I was planning to see could be undergoing a procedure, sleeping, discharged, or their level of infection control could have changed— all of which prevented me running a music session for them. When possible, I would return to these rooms later in the morning to see whether the situation had altered.’

‘While many patients and their parents/guardians were happy to engage in a music session straight away, naturally some chose not to. In a few instances, it was clear that they were unsure of whether to engage with something that they had not encountered in a hospital before and were not expecting. I found that by giving these families the option to have a session later on, and therefore the time to think about it, more participants engaged in the project.'

‘Running interactive bedside music sessions in multiple rooms restricted the number and types of instruments that I could bring in and use. This was due to the need to sterilise every instrument between rooms and the practicalities of moving large musical instruments. As the project progressed, I sourced additional suitable instruments and adapted the musical content accordingly.’