Stories from the Well-Field 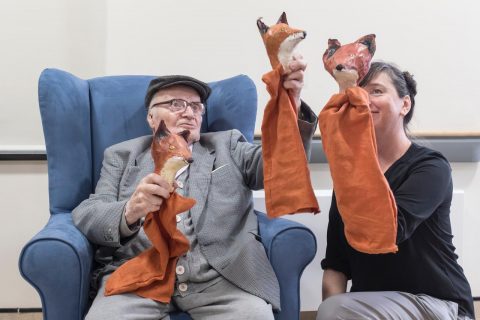 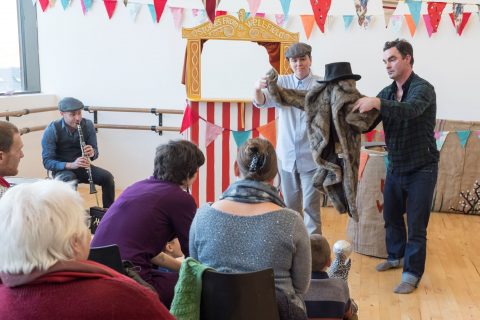 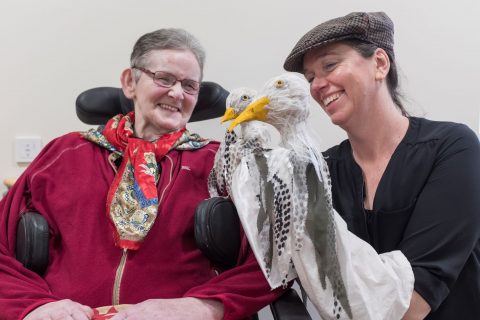 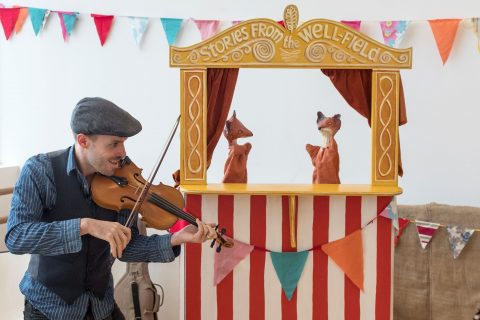 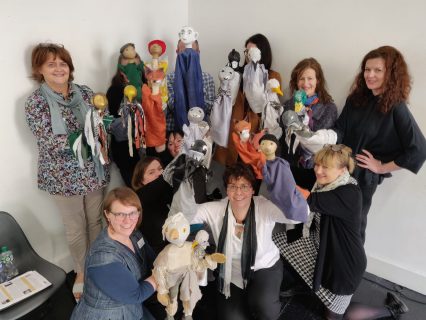 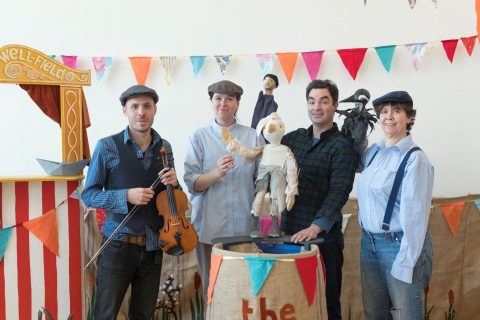 Stories from the Well-Field is an interactive performance created by a group of residents in St. Joseph’s Unit, Bantry General Hospital in collaboration with artist Tess Leak, puppeteer Eoin Lynch and composer Justin Grounds. Set in a ‘Well-Field’ during a raucous Village Fair, The Company brings to life poems about enduring childhood friendships.

This project forms part of the West Cork Arts for Health Programme and is funded by an Arts Council Arts Participation Project Award.

A core group of eight residents in St. Joseph’s Unit, Bantry General Hospital. This group, varied in interests and cognitive differences, expanded to include patients on respite, family members and staff throughout the project.

A graduate of The Curious School of Puppetry in London, artist Tess Leak was compelled by the idea that puppetry can give form to invisible forces such as complex emotions and recognised its non-verbal potential for people with cognitive differences such as dementia. Following a two-year residency as part of the Arts for Health Partnership Programme, West Cork, Tess aimed to create and perform an interactive work incorporating puppetry, poetry and music with participants in Bantry General Hospital.

The artists would be supported by two mentors:

During a series of exploratory, song-filled workshops, participants collaborated with Tess Leak to create a collection of glove puppets (with assistance from prop-maker Jan Leak). The puppets were based on characters from poems co-created with Tess about enduring childhood friendships, as well as birds and animals local to the surrounding area.

'The fact that the puppets were created with us from inception helped our notions of who they were for and created an ownership, deciding on their costumes, roles etc.'

Ideas for the content of the performance evolved out of the collection of poems as well as folk songs meaningful to members of the newly formed Well-Field Company.

Puppeteer/theatre-maker Eoin Lynch worked with the company to develop a performance out of the material. He collaborated with Tess and Dementia Care Mentor Sarah Cairns to incorporate people’s ideas, strengths and creative contributions, finding roles for each member of the company.

'The way the show was created, accessible to all our cognitive differences, meant that nothing more was required of us, only our unique selves.'

During a week in the studio with the artist team, Justin Grounds composed a different musical theme for each scene and the songs significant to participants were woven into the performance.

The puppet-booth was created by artist Michael Greenlaw after consultation with and direction from the Well-Field Company. The traditional folk-theatre aesthetic evolved out of the need to make the poems as vivid as possible in their animation.

There were interactive elements embedded throughout the performance so that other residents, staff and family members could participate without any preparation. Roles such as Lord Mayor, Stormy Atlantic, Raffle Winners and Player of the Rain were given out spontaneously during the shows.

The final poem, Reading the Sky, is performed by ‘Dinny’, the Keeper of The Well:

Before turning in to bed

I look up once more

The performance ends with Dinny flying over the heads of the audience before exiting the stage.

The premiere of Stories from the Well-Field took place in St. Joseph’s Unit in January 2019 to a full-capacity audience of residents, staff, friends and family. The next day the sold-out show was performed in Uillinn: West Cork Arts Centre with members of the audience ‘standing in’ for and performing the poems of the company members unable to leave the hospital.

A film of the performance on the unit was made by Sharon Whooley of Harvest Films and was funded by an artsandhealth.ie documentation bursary.

Informal evaluation was embedded into the end of each session on the unit via conversations between the lead artist and Dementia Care mentor Sarah Cairns.

After the performances, artist Tess Leak and Clinical Nurse Manager Margo Daly carried out a formal evaluation on the project’s overall impact.

Sarah Cairns carried out a separate evaluation focusing on the project’s engagement with participants. Testimonies were collected from participants, artists, film crew and audience members after the performances.

'Our stories that were brought alive by the puppets not only reflected the depth of our experience and gave our lives credence, they also provided a vessel in which the audience could interact and witness us as equals.'
- Sarah Cairns, activities coordinator, St. Josephs Unit, national Dementia Care trainer and member of the ‘Well-Field’ company

'There was huge joy, excitement and pride in this project, bringing to life people’s stories and sharing them with our wider community… the quality of this work was exceptional.'
- Margo Daly, CNM2, St. Joseph’s Unit

'Doesn’t it make you feel terrific, to look at all these pictures of our show.'
- Company member Candelas

'Minnie O [a childhood friend who inspired one of the puppet-characters in the performance] would be delighted with me…she was my little hero when I was young.'
- Company member Maureen

'I am still thinking about our show.'
- Company member Denis, during our debriefing, a week after the performance

'Rarely have I been so moved by a performance of any kind. It is steeped in dignity, respect and kindness. Stories from the Well-Field validates the lives of the participants in such a meaningful way. It was an experience I won’t forget.'
- Audience member for the performance at Uillinn: West Cork Arts Centre

'I realise that I started this project defining ourselves divisively as ‘artists’ and ‘participants’ but by the time we were ready to perform months later, we had become ‘The Well-Field Company’, with no distinctions between us. We were now a group of performers, all bringing different things to the show, all in it together.'
- Company member and artist Tess Leak

'There was a challenge in getting the balance between protecting a person and providing them with an opportunity to shine… while difficult, having a high-quality record of the show means it will live on as testament to the residents and the project.'
- Margo Daly, reflecting on the process of making a film of the performance

'I spent days afterwards asking myself "What happened there?" And if art is supposed to engender deep complex feelings and questioning of our place in the world then Stories from the Well-Field is great art indeed.'
- John Brennan, sound recordist for film of the performance

After the premiere in St. Joseph’s Unit, the work was performed by the artists and Sarah Cairns as part of two peer-sharings at Uillinn: West Cork Arts Centre and Waterford Healing Arts Trust (upcoming as part of Well Festival in October 2019).

Tess Leak and Sarah Cairns led a participatory workshop exploring methodologies from the project as part of Arts + Health Check Up Check In 2019 in Waterford.

In May 2019, the work toured to four Community Hospitals in West Cork: Skibbereen, Dunmanway, Castletownbere and Clonakilty. This was supported by the Arts for Health Partnership Programme, West Cork.

Sharon Whooley made a short observational film capturing the performance on the unit which was funded by the 2018 artsandhealth.ie Documentation Bursary. The film can be viewed here: http://vimeo.com/363098266