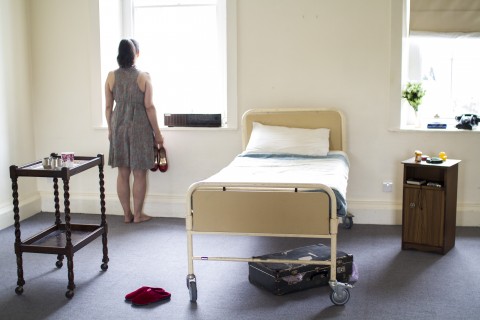 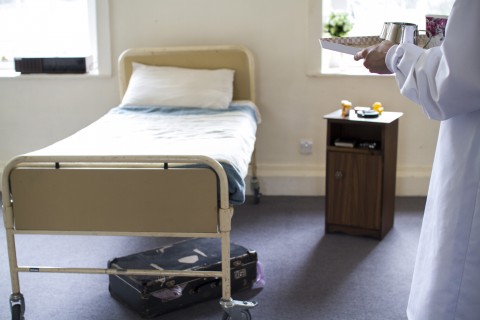 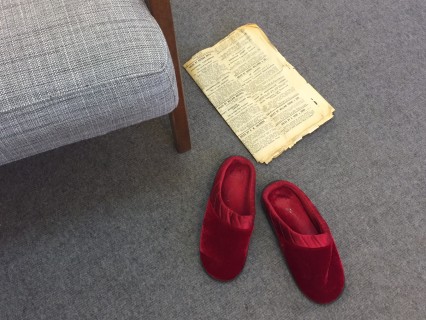 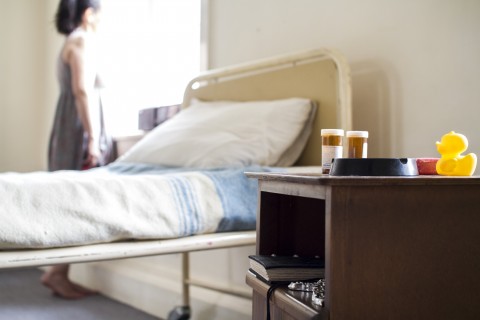 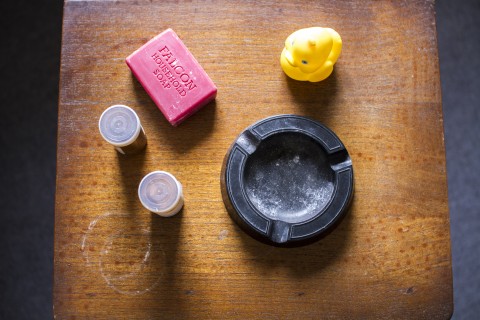 Based on oral history from psychiatric nurses,  The Bell Room is a performed audio installation that examines the job of caring as told by those on the frontline. The project was developed by Upstate Theatre Project in 2014, in collaboration with director Louise Lowe and the community of Ardee, and first performed in 2015.

Ardee, County Louth, is synonymous with St. Brigid’s Psychiatric Hospital and the project grew out of series of discussions about the impact of the institution on the village.

The project began as an open investigation and desire to initiate a project in Mid Louth. Its development was circuitous, meeting many different individuals, organizing public meetings and engaging with different groups.

Central to the project’s development was the Tatters, a group of ladies in the village of Ardee who create a variety of embroidered and patchwork pieces depicting different elements of local interest. The discussions led to the influence of the hospital as a major employer for the locality. This in turn led to introductions to nurses and a focus on St. Brigid’s Psychiatric Hospital, its history and development and that of some of the attendants and nurses who began their career there.

It was through a series of interviews that the project began to find a focus point, which became a reflection on care in a psychiatric context.

The project began as simple introductory meetings and evolved into discussions about living in Ardee. Through the various conversations, retired nurses and attendants of St. Brigid’s Hospital became the main participants and a former patient of St. Brigid’s Hospital acted in an advisory capacity. The processes involved are techniques more closely akin to oral history collection and developed into a series of one-to-one interviews with retired nurses.

Project facilitators worked with participants for over six months, examining their attitudes to being at the frontline of the mental health care profession over the last sixty-five years.

While Upstate Theatre Project had hoped to evolve and develop a group based on these individuals, time commitments precluded developing this phase into a collective process of reflection on the material by the interviewees.

The interviewees were invited to develop the testimonies into a possible script. All were agreeable to their interviews being used but only two were interested in a collective editing process. The editing and shaping of a script was assisted by project facilitators and the project director.

An important element of the editing brief was that nothing could be altered or invented. The process was a matter of aligning the separate material thematically as it originally appeared from the transcripts of the interviews. The final script was vetted by interviewees and then presented as a performance project to a number of newer participants associated with Upstate community projects. Two of the nurses interviewed performed as part of this group.

It was through the phases of editing, the process of readings, the recordings of these readings and the soundscape design that the aesthetic and artistic interplay with the source material began to develop.

The choice of audio installation for the main body of the presentation sprang from the logical conclusion that the original interviewees had chosen not to be seen.

The performance did retain human interaction at the beginning and end of the aural experience using professional actors and community performers on different occasions and dictated by personal availability and scheduling of performances.

The project culminated in an audio installation, with live actors interacting at the beginning and conclusion in a built replica of an old hospital room. This initial performance was hosted by Ardee Library in April 2015 in a side room and was initially performed for five days (six hours per day) for an audience of one.

The Bell Room was subsequently performed at the 2016 Drogheda Arts Festival and will be performed in Dundalk, hosted by An Táin Arts Centre from 26 September - 1 October 2016.

'The bell room [installation] is special as it consists of an amalgamation of memories. It is made up of the furniture and decoration and items as remembered across many of the interviews.’  - Director Louise Lowe

‘All bell rooms were different. We took it in turns to sleep there… everyone had to do it. It was a small square room, the end room just off the wards. You could be called in the middle of the night…  In my mind it was always the deepest, darkest winter’s morning in the bell room – tea and toast and cigarettes. There was a small bed and a chair and a locker. There was a picture of the sacred heart and a radio. Later,  I remember a digital clock… big Tom playing requests, sent from the payphone in reception…  Radio Luxemburg late at night. Smoking in bed, listening to the shipping forecast… I don’t remember a bell but there must have been one.’

Audience members were invited to reflect upon the performance and their anonymous comments were collated and shared with all stakeholders. The process of participant evaluation was largely oral and conducted through meetings and conversations with participants.

The overwhelming reaction and feeling for all involved is one of pride in producing a work of art that from a social aspect reflects on the history of care with an honest and genuine voice.

'The Bell Room emerged from the community of Ardee and the project reflects a significant element of their cultural narrative. Ardee was synonymous with St. Brigid’s Psychiatric Hospital to the extent that no one went to St. Brigid’s for treatment, they went to Ardee. The space became symbolic of the ‘other’, and rumours of what went on in there added to its mythology and to the mythology of mental illness. The phrase, “They’re in Ardee” allowed for a generic dismissiveness, of a place, a practice of care. In a way it was reflective of a wider reductionist attitude toward mental health throughout Ireland. In The Bell Room, Upstate Theatre Project sought to break down the mythology and begin the long process of re-presenting mental health as a central human concern. The effect of storytelling, the essence of the aesthetic design, makes human again that which had become alien.' - Declan Mallon, Upstate Theatre Project

'The impact was immediate. My parents are retired psychiatric nurses and I am one too. I was in my parents era in that room. I had heard stories, snippets. I have lived that story – the system has not changed deeply enough.  The holy pictures on the walls in the room pushed me to my parents era. I think one of those pictures is in my parents' house. I was brought up in the grounds of a psychiatric hospital. The portrayal, the history was familiar, really well done.' - audience comment

'I chose to lie upon the bed for most of the 20 minutes. An uncle of mine was a fairly constant in-patient in ‘Ardee’ as we called it in the ‘70s when I was a boy. I was intrigued to hear the other side so to speak – the views and voices of staff. The experience was oddly comforting in spite of the dark world evoked. The voices and accents were familiar and real. The music was beautifully arranged around the text.' - audience comment

'The stories evoked a mixture of positive and negative emotions. The nurses seemed to have great craic, the dancing, the camaraderie etc. The negative thoughts for me were around the people signed in so readily, the bath routine and the seclusion room. Nursing has thankfully changed for the better for patients. I just found it a little difficult to hear all the stories along with the music at times. Really like the idea of being immersed into the setting.' - audience comment (from 'psych nurse')

'Room was very atmospheric and immediately transported me to the Bell Room. I like the bareness, the functionality of it. Couldn’t help sniffing the soap. Liked the variation in voices and the stories attitudes and how some of them seemed not to know what they were signing up for. One of the closing statements will stay with me, how I was reminded that we’re all only one step away from being admitted. And, of course, a cup of tea and a slice of toast is welcome any time – well done.'  - audience comment

All the elements involved in the process of developing the material based on the interviews were discussed with each interviewee. The performance was attended by all.

The audience responses to the project were documented and shared with all participants and stakeholders.