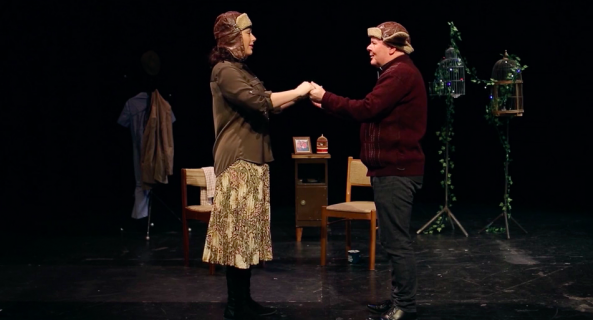 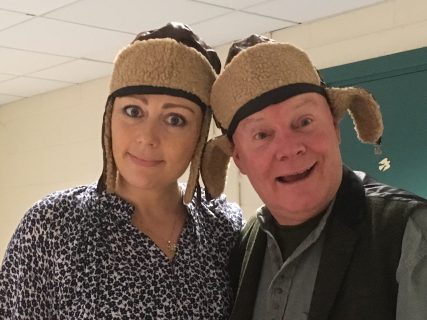 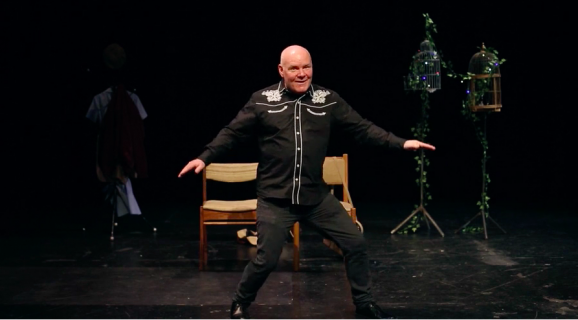 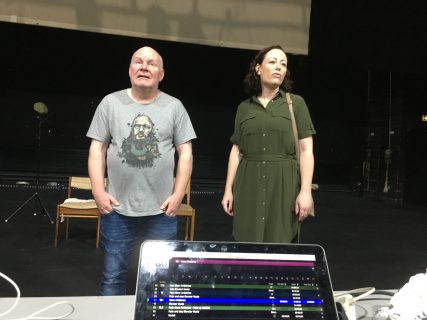 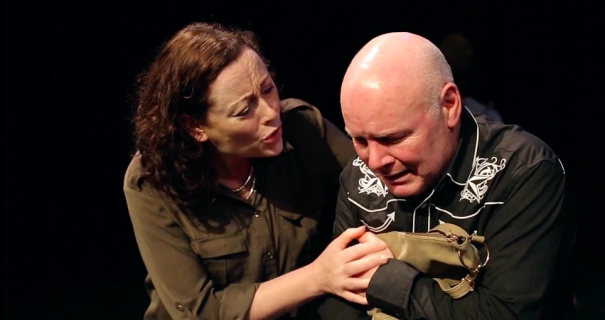 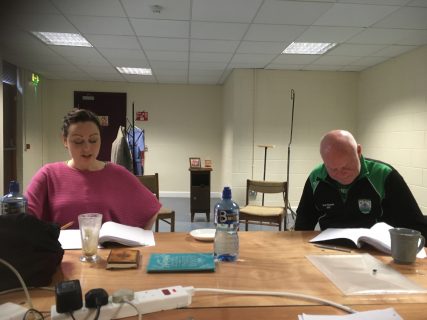 The Songbirds is a piece of theatre researched and written by playwright Guy Le Jeune examining the experiences of people living with dementia, and their primary carers. The Songbirds was produced through an innovative collaboration between An Grianán Theatre, Ulster University Institute of Nursing and Health Research, and Dementia NI.

The script was developed over two years and the production has been touring to venues across the island of Ireland since its first performance in 2018.

A cohort of dementia dyads (person with dementia and their primary carer) suggested by the University, and members of Dementia NI, the Northern Irish dementia advocacy group. Thirty-six dyads took part in the original research and 12 of these met with Guy to further refine the content of the piece.

The project’s aims were:

An Grianán Theatre’s Artist in Residence, Guy Le Jeune, has worked in the area of reminiscence and making theatre from memory for over eight years. The Songbirds originated from a chance meeting between Guy and Professor Assumpta Ryan and Dr Claire McCauley from Ulster University at a reminiscence conference in Antrim, where the University was presenting their research into technology facilitated reminiscence in dementia care.

After long discussions around the scope and possible outcomes and outputs of a potential co-production between An Grianán and the University, and several weeks addressing questions and concerns from the University’s Ethics Committee, Guy was given permission to contact a number of dementia dyads from the original research project. With the dyad’s co-operation and consent, a number of interviews were conducted, initially using the reminiscence methodology Guy has employed in previous socially-engaged theatre projects, but later simply conversations around the impact of a dementia diagnosis.

From the stories and conversations, Guy borrowed an extraordinary range of experiences and oral histories from the dyads - stories of RAF radar operators in WWII, the shirt factories of Derry, and one man’s love of canaries and linnets, which gave the show its title and the inspiration for its opening monologues below.

GERRY CHECKS THE BIRDCAGES, ONE BY ONE.

GERRY:          (To audience as if they're an imaginary friend) Memories. They're like songbirds. Sweet and brash in the morning, full of life and love, and loud enough to wake even the sleepiest of souls. In the daylight, they soften, dimmed by the weight of the hours, and by evening, they're quiet and sweet, fading into the twilight. The dawn chorus is forgotten and the light of the setting sun settles over the world, muffling the larks and the linnets. And once that star has slipped behind the hills, the birds are quiet, as if they've forgotten everything. But if you listen carefully, if you concentrate, you can still hear the echoes, swimming among the stars. Memories of songs, of mornings, memories of the wind and the rain, the sun and the clouds. They're not lost, not misplaced, just displaced, if you were. They're still there, somewhere. We just have to listen a little harder and sometimes fill in the gaps with the songs in our own hearts.

GERRY GOES BACK TO THE BIRD CAGES

GERRY:          Are you wondering why the cages are empty? That's not so easy to explain. I could tell you that each of them lived a full life, the linnets, the canaries, and the mules. Oh sorry. The mules, they're a cross, a hybrid. They can't reproduce, but they have the sweetest songs of all. I could tell you that each song was a year, a week, a day, sometimes even just a few moments. I could tell you that they're away up there, flying free, singing their hearts out, but if I'm honest, I'm just not sure. I'm not sure if I remember them at all. That's the thing about it. Some things stick in your head, others are just beyond reach. You can't quiet grasp the words or the thoughts. You know they are there, but they are just out of focus and out of time.

Following further research, Guy wrote the first draft of The Songbirds. The script underwent a number redrafts, with feedback from the University and members of Dementia NI.

Rehearsals commenced in autumn 2018 with two Donegal-based actors, Valerie Bryce and Eoghan MacGiolla Bhrighde. The actors play a number of roles, and both have experienced their own life-changing diagnoses in the past number of years. Those personal journeys also fed into the development of the piece. We gave a rehearsed read-through for members of Dementia NI and further edits to the script were completed.

The first performance was in front of 300 First Year Nursing Students at Ulster University in November 2018 and there have been 20 performances to date. The play has been seen by over 2,000 people in theatres and other venues across the island of Ireland with audience groups from the voluntary and statutory sectors, secondary and university students, the general public, individuals living with dementia and their families, doctors, nurses, care home staff, dementia advocacy groups and policy makers.

As a result of a competitive bid, the play was selected for inclusion in the 2019 Economic and Social Research Council (ESRC) Festival of Social Science in Belfast and was one of a few performances to sell out.

The production continues to tour. For further information about upcoming performances or to book the show, please contact Patricia McBride, Director, An Grianán Theatre.

The play has been evaluated using quantitative and qualitative methodologies. Analysis of a 10 item pre and post- performance questionnaire, developed by Ulster University, showed a significant improvement in audiences’ attitudes and understanding of dementia and its impact on lives and relationships.

Qualitative data and feedback from Twitter and Facebook has further substantiated the reach and significance of the impact of the play.

Education and Research Outcomes
The results of the pre and post-performance evaluation questionnaires (available from Professor Assumpta Ryan, Ulster University at aa.ryan@ulster.ac.uk) indicated positive changes in attitudes and understanding of dementia and of the impact of the diagnosis on individuals and relationships. The play has been described as 'emotional, funny and touching' by Dementia NI and as 'insightful and educational' by the Alzheimer’s Society.

The educational impact of the play is evidenced by an email from a secondary school teacher who described it as a 'sincere, educational and wonderful experience' and requested a copy of the script for use with her GCSE and BTEC classes. Positive feedback from university students and staff has resulted in the play being introduced into the BA (Hons) Drama degree at a local university.

The Commissioner for Older People for Northern Ireland tweeted, describing the play as 'a very powerful performance and a great portrayal of people’s journey with dementia.' Additional performances of the play have been commissioned by the Senior Environmental Health Officer with Belfast City Council, and other organisations, further evidence of its impact on societal attitudes.

Artistic Outcomes
I have been uncommonly privileged to work with some extraordinary people, living with a life-changing diagnosis, and we have been humbled by the response. The piece has surpassed all my expectations, and while qualitative evaluation is by its nature subjective, the feedback below gives some sense of how important and powerful the play’s impact has been on people directly affected by dementia.

'To be honest, I was totally overwhelmed. Every action mirrored that day to day life of having a family member with dementia. So much of our time is repetition and reminding my husband of things that happen in our lives and the actors portrayed this… hopefully it can be televised as it really can help families' - family carer

'I would thoroughly recommend this for nursing, social work and medical students' - Dementia Navigator

'It was very emotional, it was just like watching myself. However I still felt good about myself, it didn’t make me feel down watching it, it gave me a lot of hope that people seeing this play will change the perception of dementia. We have dementia and we have to get on with it, I just get on with my life and do what I can. People have the wrong idea about dementia, they think we sit in the corner doing nothing, but when you see this play you will get an understanding of the person who has dementia, it gives a 100% perfect representation of a person with dementia, that is the truth. Families need to see this, they will know then what we feel and experience and they will understand us better' - person living with dementia

'It has changed my perception of dementia ... this should be seen by everyone, not just people who help people with dementia' - Occupational Therapist

The outcomes of the project have been disseminated in a range of reports from Ulster University. Prof Ryan was awarded a Civic Impact Grant to work with An Grianán Theatre to develop the theatre piece that culminated in The Songbirds. The Civic Impact Report was widely disseminated and culminated in a request to Prof Ryan to submit a bid to include a performance of The Songbirds in Belfast’s 2019 Economic and Social Research Council’s Festival of Social Science.

We also have a video recording of the play which is used as an educational resource for voluntary, statutory and community based organisations to improve societal attitudes towards dementia: http://vimeo.com/389473132