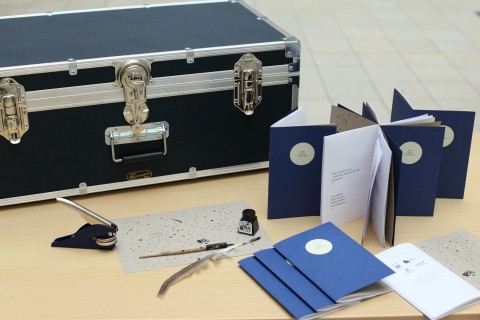 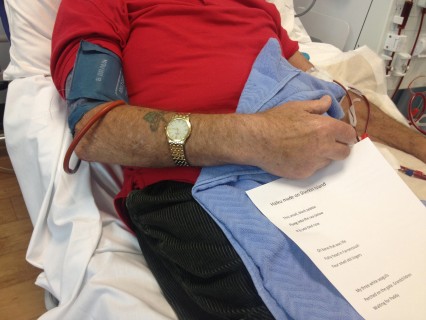 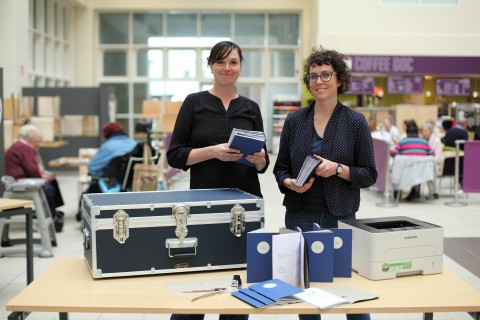 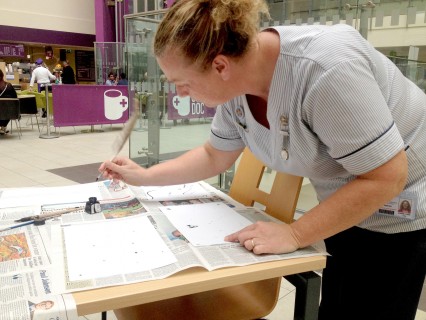 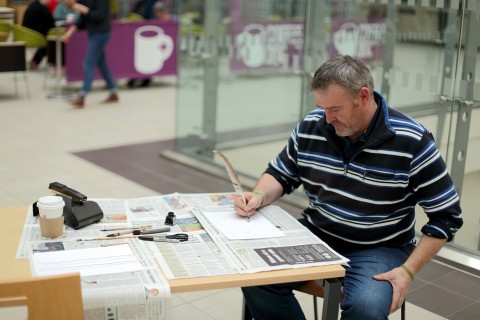 Designer Orlagh O’Brien and artist Tess Leak, who work collaboratively as Haiku Island Press, facilitated a poetry and book-making project in the Department of Renal Medicine, Cork University Hospital in 2016. They worked with a group of patients, during their dialysis treatment, to create a collection of haiku poems, which led to the on-site production of a limited edition book.

The group was made up of 24 patients undergoing renal dialysis treatment sessions lasting for three hours at a time.

The Cardiac Renal Centre is part of CUH which has a long-standing history of supporting various participatory projects which are under the guidance of Arts Co-ordinator Edelle Nolan.

Inspired by Jeremy Deller’s idea, 'Art is not what you make, it’s what you make happen', the ambition of the artists was not only to create a high quality hand-made edition of books, but to instigate a poetry-making culture in the hospital. The artists consider the book both a symbol of empowerment and change-making agent. They aimed to develop a multi-disciplinary method of poetry book-making and publishing in healthcare settings where the process and results could be shared and toured publicly.

Originally from Japan, haiku are short three-line poems, often evoking the natural world. During the research phase of this project in 2015, the artists discovered haiku making is particularly suited to a healthcare setting in that the process is non-invasive, flexible and gentle.

Orlagh and Tess started at opposite ends of the ward and sat ‘one to one’ next to the patients during their dialysis treatment with only a note pad and pen to hand. This meant they were able to move out of the way when staff needed, for example, to make adjustments to the equipment or check on the patient.

Some haiku arose out of conversations about detailed observations of the natural world during favorite walks. Others were about health challenges such as the strict diet dialysis patients have to follow.

Some haiku poems were made by the artist and participant during treatment:

delivering post
there’s bound to be a twist in
the road - snow, heat, gales
John Joe

Others were created during the journeys to and from treatment and in the participants' homes and gardens:

A one-day open workshop, held in the hospital atrium and in view of the Renal Unit, was designed to share as much of the book-making process as possible. Orlagh and Tess set up a printer, tools and materials and people turned up to watch the process unfold throughout the day. Staff, patients and visitors to the hospital were invited to contribute to a drawing that would become the endpapers of the book. One hundred copies of the book were constructed during the day.

A limited edition of a handcrafted book (total 150 copies) entitled Tiny, Kind Gestures was created, containing the collection of haiku poems by the participants. The books were made in the atrium of the hospital by the artists during a day-long workshop which was open to staff, patients and visitors.

The title of the collection is from one of the poems and reflects a reoccurring topic of conversation: the deep appreciation by the patients for the ongoing kindness shown to them by the staff during their dialysis sessions.

An exhibition of the poems as well as a book launch and reading is taking place in the atrium of the hospital in November 2016. Participants, their families, friends, staff, funders, local libraries and arts organizations will all be invited to celebrate.

Feedback and testimonies from all participants, Arts Co-ordinator Edelle Nolan and Joanne Lyons, Clinical Nurse Manager, were gathered and a project report will be submitted to Cork County Council’s Arts Office.

Orlagh and Tess also wrote notes in a reflective journal after each session which included any informal feedback from staff during their work on the wards.

The artists found that the haiku form was really suited to the wards. It was non-invasive, low pressure and poems could evolve naturally during conversations with participants. The artists also found that bringing the contemplation of nature into a clinical environment supported an atmosphere of calmness and creativity.

There was a real appreciation by the participants and staff of the quality of the resulting poetry collection and the physical book itself.

'I’ve never written anything in my life, before now!' - Participant

'We had originally proposed that we would invite staff to participate in the haiku-making. However, we learned that it was too much to expect creative contributions from staff as their work is so intensive. Nonetheless, their support and interest was frequently palpable and this in itself contributed to the creative atmosphere on the ward.' - Artists

'I didn’t know what haiku poetry was, but what it has done for the patients is beautiful, absolutely lovely … it’s uplifting to know that the patients have achieved something they never would have dreamed of.'  - Joanne Lyons, Clinical Nurse Manager, Renal Unit

Copies of Tiny, Kind Gestures were given to participants, staff, partners, funders, the Irish Kidney Association, local libraries and arts and health programmes.

Press: The project was covered by journalist Mary Hassett in an article in the Evening Echo http://www.eveningecho.ie/life/patients-perfect-poetry/2548985/