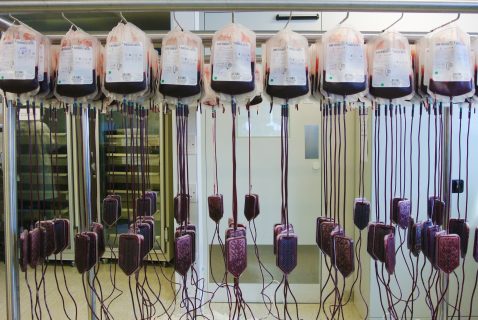 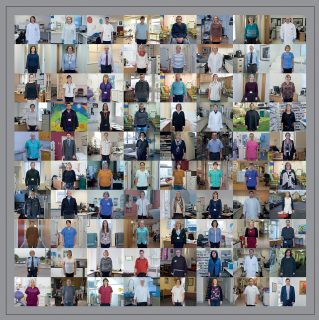 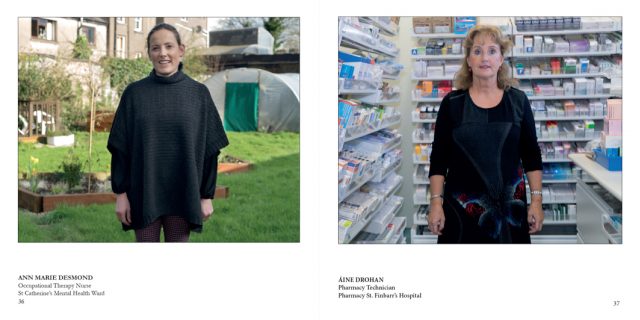 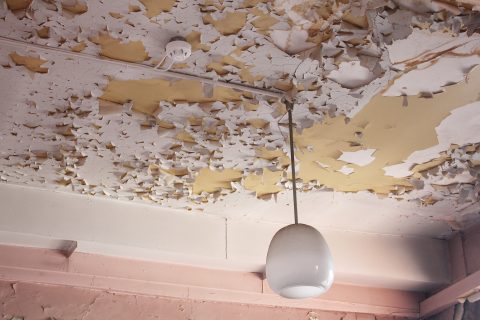 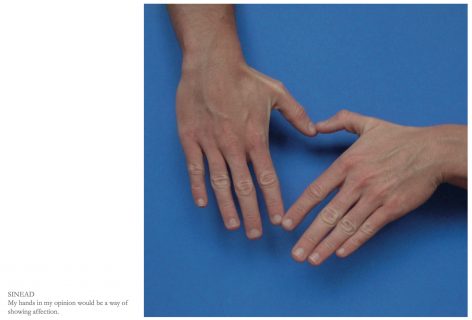 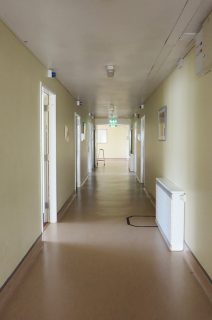 TODAY was a photography project located in St Finbarr’s Hospital Campus in Cork city from 2013 to 2016. The project was led by artist Colette Lewis working in participation with healthcare staff to create new photographic work in response to the hospital campus.

Participants included up to 25 healthcare staff working in various departments across the hospital campus.

In 2013, there were significant structural and staff changes happening in St Finbarr’s Hospital Campus. Many of the old buildings were being renovated as new offices and large numbers of HSE staff were relocating to the campus, thus changing the composition of services on-site.

The project was initiated at this significant time to somehow capture this moment of change in the life of the hospital campus. It was also intended that the project would support staff integration of personnel on campus in the midst of these changes.

What developed were two distinct strands:

To get the project up and running within the hospital workplace required both a formal and informal approach. Aidan Warner (HSE Principal Community Worker) was already a member of staff in the hospital. He was key to facilitating the artist’s initial introductions to many departments and staff. He arranged for Colette to spend time with staff; shadowing them as they went about their work and spending time with staff in maintenance, security, domestic, nursing and transport departments, those who worked in the blood bank and the chaplains.

The plan at this stage was twofold: to gain an insight into life in the hospital and to meet staff to talk to them about the project and to get them involved.

The first phase of workshops ran over four months between July and December 2014, roughly every fortnight, in three workplace settings with up to 25 staff getting involved. The workshops introduced staff to basic technical and creative aspects of digital photography. Staff focused on photographing the built and natural environment on campus to reflect on layers of historical, professional and subjective narrative embedded in the hospital campus.

Twenty images were selected and exhibited in-house in the Social Centre Restaurant in December 2014.

The second phase of workshops developed over seven months between February and October 2015. Up to 15 members of staff participated in this cycle of the process with nine completing the project. The main focus was on developing a deeper enquiry through individual projects for a group book publication. Their brief was to produce a six-picture story or thematic collection of images in response to specific aspects of hospital life, grounded within their own experience and perspective. Final images for book publication were selected through a group process of peer review.

The workshops were integral to the artist’s research process. It gave her an insight into campus dynamics and the concerns and personal experience of staff. It enabled her to develop a bond of trust that would later permit her to photograph staff for a portrait project in Strand Two.

Strand Two of the project commenced after the workshops were completed from November 2015 to March 2016. From time spent working in St Finbarr’s, Colette was interested in the social fabric of a healthcare institution: the idea of an institution as a system of relationships, with over 1000 staff working on-site forming a complex web of interaction. The idea was to create a book publication of environmental portraits that would depict staff in a range of workplace settings and roles across the campus. The artist photographed 151 people working in 50 different services.

Strand One of the project produced two artistic outputs. The outcome of the first phase of workshops was a series of photographs that focused primarily on the ephemeral qualities of the built and natural environment of the campus, of quiet and fleeting moments in time and space.

Twenty images were selected and exhibited in-house in the Social Centre Restaurant in December 2014.

The outcome of the second phase of workshops was a photographic book publication of individual staff projects launched in June 2016. Twenty work-in-progress images were selected and exhibited in-house in the Social Centre Restaurant in December 2015.

The range of project ideas that emerged unveiled an insider’s perspective and intimate knowing of a place. Their images take us on a journey through interior and exterior settings, traversing time and space, giving the viewer a multitude of entry points with which to glimpse a ‘momentary snapshot’ of life inside the hospital campus.

The artistic output of Strand Two was a book publication of staff portraits launched in June 2016. Staff were identified by their name, occupation and department. Portraits were arranged alphabetically by surname in book format, juxtaposing two people, possibly unknown to each other, across a two-page spread.

The book as an object within the hospital campus functioned as a form of intervention, circulated throughout the campus and finding its way onto the desktops and tabletops in offices, tearooms and clinical waiting rooms. It was envisioned that the book would mediate a personal encounter between staff working in separate yet interconnected departments in the campus ecosystem.

The project was evaluated through a reflective text written by the artist and a questionnaire completed by project participants.

Reflective review: 'Artistic Encounters in the Interstices of a Healthcare Workplace':
http://www.artsandhealth.ie/wp-content/uploads/2018/01/TODAY-reflective-text_Colette-Lewis.pdf

Locating the project within the flow of the working day I felt performed an important intervention, opening up a new kind of workspace within the institution, enabling a particular kind of thinking and action to emerge. A kind of thinking and action that is sensory based, affective, visual, imaginative and intuitive. One that is discursive, critical and reflective. It’s with this new sensibility that staff investigated and reflected on their own experience. It’s with this new sensibility that staff encountered the familiar with fresh eyes.

This workshop strategy to integrate the project into the schedule of the working day had a degree of success as regards staff participation. In order to participate, staff had to be willing to attend during a set lunch break. This tended to favour administrative type roles more and proved restrictive for staff with variable work patterns, those who worked off campus, did shift work or didn't take set lunch breaks such as care-based staff and catering.

The images staff created offer the potential of another way of seeing and looking at life on campus. Their images propose a moment for pause and reflection within the flow of the working day routine. Their images were an invitation to look beyond the surface and operative reality of the workplace by drawing attention to the more ephemeral and relational qualities, the more deeply connective aspect of our experience of place and being.

It’s at this deeper level of relational connectivity that the environmental portraits of staff function. At the core of this project social engagement has been fundamental in navigating and negotiating along intricate routes and intersections of connectivity between staff and institutional networks. What emerged in visual book form was an intricate ecosystem of roles and activities operating on-site. The project endeavours to draw attention to the social fabric of the institution. Rather than being a catalogue of professional services and roles, the book mediates both an introduction to personnel and personal encounter.

The in-house photographic exhibition was the first social event where all participants gathered and met as a new ‘community of photographers’ on campus forming new social bonds through this new group identity. Putting staff creative work on display in their professional place of work was significant in opening a space for this aspect of themselves to become visible and present within the context of their professional lives.

The photographic work on display revitalized the familiarity of the workplace offering a more poetic impression and sensibility. These captured fleeting moments thus became an invitation for pause and reflection amidst the flow of the working day.

The following summarises key responses from staff on the impact of the project on their creative life and what doing a creative project within their place of work meant to them:

Overall, I felt that the real potential for a socially engaged art project to operate within a healthcare workplace lies in its interstices and capacity to cultivate an expanded sense of oneself beyond fixed identities, to access a deeper sense of self, connection and place.