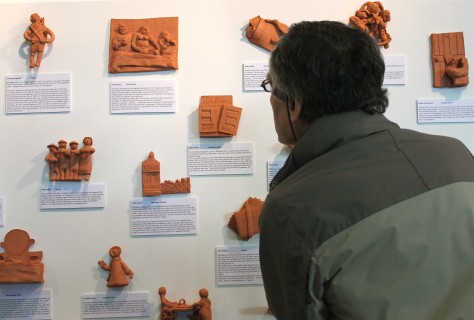 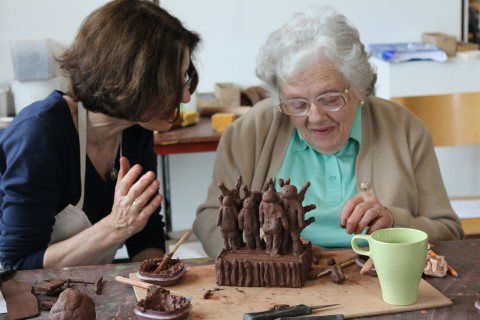 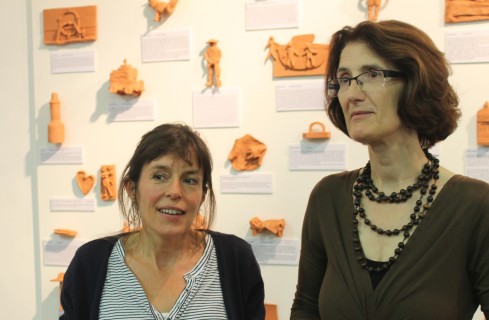 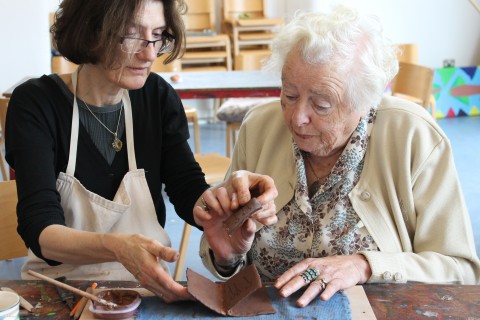 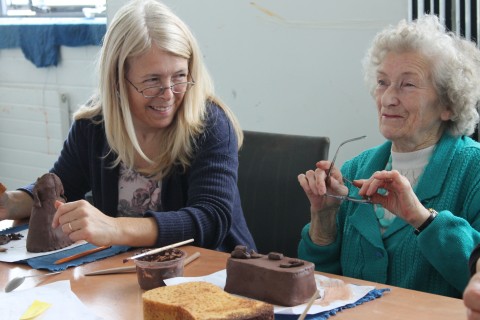 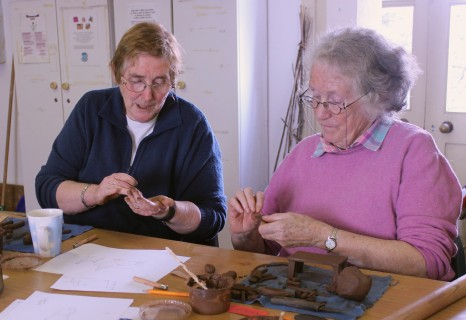 Wise Ways was a participatory arts project with older people, originating at Raheen Hospital in County Clare. Funded by The Arts Council, the project toured to KCAT/ Mount Carmel nursing home in Callan, Axis Arts Centre, Ballymun, Dublin and Arás Eánna, Inis Oirr. The outcome was a unique collection of handmade artworks in clay and personal memories or stories created and exhibited at each venue.

Wise Ways aimed to document the wealth of knowledge and sustainable ways in which the older generation lived in distinctly different parts of Ireland in the past. The project aimed to highlight the wisdom of a generation who knew well how to survive and adapt to their immediate environment, sharing a great sense of community.

The work created was to be a long-lasting and inspiring record of clay art works and informative text.  As a reminiscence experience, it was to offer nearly 200 individuals a vital opportunity to voice memories and share them both in small groups and one-to-one with facilitators. As an artistic experience, it sought to allow expression for inner visions and creative exploration. The project offered social inclusion to many people who suffer isolation through age or disability.

Selected groups of up to 50 older people and staff in the catchment area of the designated arts centres participated in a week of intensive workshops.

Through group discussion and conversation guided by the facilitators, memories were triggered along the theme of ‘Wise Ways’, ways of managing in life, when you didn’t have what you needed, had to make do, share or repair, re-use and adapt. The project sought to highlight how, through adversity or necessity, problems were commonly solved with creative ingenuity.

As numbers were smaller on Inis Oirr, the project extended and became inter-generational. The students from Colaiste Gobnait interviewed their older relatives and brought along their collected memories and stories. Some memories of sustainable living included  the drying and salting of fish and the making of an expanse of rocks into valuable potato-growing soil using seaweed and sand. In contrast, in Ballymun, there was a memory of collecting ‘pickeroonies’  - bits of driftwood and unburnt cinders - from ‘The Dumps’ at North Wall to bag up and sell for a threepence to either give to mother or go to the cinema. In Callan, a participant reminisced about making fuel for the fire from ‘column balls’ - made from coal dust - which were collected for free from the mines and mixed with deeply dug yellow earth.

The bringing together of younger artists from KCAT with participants from the local nursing home was a new and particularly rewarding experience for all, one which both groups aim to maintain. After group and one-to-one conversations, simple line drawings led to working in clay. Most of the older participants, who hadn’t worked in ceramics, enjoyed the tactile and sculptural quality of the clay, often referencing working with the soil of the land or with pastry.

Following the week of workshops in each venue, all pieces were returned to Terry’s studio in Dublin for firing and all ‘stories’ collected were written up verbatim by Nicola. The texts were then prepared as wall-mounted labels for each art work.

At each arts centre the outcome of the workshops was an impressive wall-hung exhibition which also included some of the original Wise Ways collection from County Clare. Over a hundred small scultural, wall-hung, red clay works of art with descriptive personal stories gave a strong impression of the breadth and intensity of the processes involved. There was an official opening for all the participants, their families, carers and friends, as well as the wider public, students, schools and community groups. In Callan, the work was included in the annual Abhainn Rí Festival. On Inis Oirr the groups involved decided to box frame all the individual pieces and keep them on permanent display.

The project was evaluated for the Arts Council by the artists. Personal interactions with participants during workshops and with visitors to the exhibitions informed the evaluation - as workshops took place side by side with the gallery space the artists had time to listen, respond and evaluate at each stage of the project. At the end of each day, the artists reread stories, looked at work-in-progress and discussed their approach and method of working with each participant they engaged with. They encouraged staff to participate in workshops which garnered further responses from each community beyond the artists' time with them. There were also extensive photographic records taken throughout.

'Our own working relationship as artists over a period of 10 years added weight to how we worked together. We were grounded in the practicalities of past work, in respect, in trust, in commitment, in an intuitive response to each other’s working needs during this project and the ability to work side by side balancing our separate tasks. Evaluation of ourselves and our working relationship was verbal and ongoing as the Wise Ways publication, further exhibitions, talks and workshops keep us connected.' - Artist Terry O'Farrell

The feedback from participants and stakeholders was extremely positive. Wise Ways-Inis Oirr is now on permanent display and Wise Ways-Callan moved on to Mount Carmel nursing home for a number of months after the project finished. All partners at each venue agreed it was one of the most successful participatory arts projects they had been involved in.

The project encountered a number of challenges:

The opening nights were a testament to the huge popularity of the experience, which had been very personal and intense for the many participants as well as the artists themselves.

'The Wise Ways experience was one of the most memorable for the the participants from Mount Carmel House. The participants got to have time away in an environment that they would not normally visit. They were able to share stories of their past memories and experiences with Nicola and each other which led to some lively discussions. Many of the participants discovered hidden talents and were able to create works of art made from clay with Terry's assistance and guidance. These pieces have been displayed here in Mount Carmel House for all their families and friends to view and in turn compliment the artists. The individual art works have become treasured pieces and will be precious heirlooms for whomever will have ownership once the creator wills them to a loved one. Because of the efforts and new experience the participants had stories to tell for a long time after the event. We will be forever indebted to Nicola and Terry for bringing this experience to us. They are so very passionate and talented about what they do and because of this they were able to help the participants feel at ease to share memories and create beautiful pieces from clay.' - Anne Walpole, Nurse/Manager, Mount Carmel House.

'In September of 2012 axis worked with Nicola Henley and Terry O'Farrell to present and host Wise Ways. The process and end result was an ideal fit for axis, based on our ethos of excellence and inclusion. The participatory nature of the project and the depth of the participants' involvement from the outset was one of the highlights for both us and the participants. Their stories and memories came to life and were captured in the beautiful, hand-crafted pieces. The exhibition gave participants an opportunity to be part of a national project – something bigger than them and their place. It bridged an urban/rural divide and showed the differences and similarities across the country. The older people involved still speak about the project and the “lovely ladies who did the pottery with us”.' - Niamh Fitzpatrick, Arts Programmes Co-ordinator, axis: Ballymun

'Wiseways/Béaloideas Inis Oírr is one of our permanent exhibitions which is exhibited all year round. It is one of our most popular exhibitions, especially with teachers/ students doing school projects.' - Mairéad Ní Gallchoir, Manager, Aras Eanna Arts Centre

Photographic records were kept throughout the project and between 50 and 80 portraits of everyone included were printed out A4 and mounted on a wall of their own at each venue. Each exhibition also had written documentation about the project and participants involved. Local radio stations and newspapers covered the story in each centre.

The Arts Council
Hanging and promotion for exhibition and project: KCAT, Axis, Aras Eanna
Funding in kind from all groups involved.