Artist Vukašin Nedeljković began taking photographs of his surroundings as a coping mechanism during his time housed in a Direct Provision Centre. This work has grown into the multi-disciplinary platform Asylum Archive. Here, he discusses the reality of the Direct Provision Scheme for people seeking asylum and how Asylum Archive provides a collective space for documenting these experiences.

My focus and interest remained the same, looking at the architecture of confinement, ghosts, traces, remnants - what is left after people have been transferred or deported.

‘Memory, for migrants, is almost always the memory of loss. But since most migrants have been pushed out of the sites of official/national memory in their original homes, there is some anxiety surrounding the status of what is lost, since the memory of the journey to a new place, the memory of one’s own life and family world in the old place, and official memory about the nation one has left have to be recombined in a new location.’ (Appadurai, ‘Archive and Aspiration‘ 21).

The Direct Provision Scheme was introduced in November 1999 to accommodate asylum seekers in state designated accommodation centres. There were originally over 150 centres located across the country; some of the buildings include convents, army barracks, former hotels and holiday homes. Most of the centres are situated outside of the cities on the periphery of society. That decision significantly reduced integration with the local population leaving the asylum seekers community to dwell in a ghettoized environment. Asylum seekers live in overcrowded, unhygienic conditions, where families with children are often forced to share small rooms. The management controls their food, their movements, the supply of bed linen, and cleaning materials, exercising their authority, power and control (Foucault). According to Ronit Lentin, Direct Provision Centres are ‘holding camps’ and ‘sites of deportability’ which ‘construct their inmates as deportable subjects, ready to be deported any time.’ According to the Free Legal Advice Centre (2009), these privately-owned centres, administered by the Government of Ireland, constitute a ‘direct provision industry,’ which makes a profit on the backs of asylum seekers (Lentin).

The Direct Provision Scheme is a continuation of the history of confinement in Ireland through borstals, laundries, prisons, mother and baby homes, and lunatic asylums (O’Sullivan; O’Donnell). When the Irish State initiated the Direct Provision Scheme, it deliberately constructed a space where institutional racism could be readily instantiated, explicitly through, for example, the threat of transfer to a different accommodation centre and deportations.

In this sense, Direct Provision Centres are ‘the absence of everything . . . the place where the bottom has dropped out of everything, an atmospheric density, a plenitude of the void, or the murmur of silence’ (Levinas 46).

An Amnesty International Ireland study on mental health and marginalized groups in Ireland (2003) underscores the dual trauma facing asylum seekers, that which they have experienced in their homeland and then in the land where they seek refuge: ‘On arrival to a new country, they may well [go] on to face confinement in detention centres, enforced dispersal and ongoing discrimination.’[1]

Akidwa, a national network of migrant women in Ireland, published Let’s Talk in January 2020 highlighting the lack of support available to many women, particularly those who live in Direct Provision:

‘…They recounted experiences of many losses, not only the loss of a loved one, but also the loss of homeland, cultural group, employment, housing, and security. It is to be expected that being bereaved is only one of many losses that may affect mental health.’

‘It is to burn with a passion. It is never to rest, interminably, from searching for the archive right where it slips away. It is to run after the archive … It is to have a compulsive, repetitive and nostalgic desire for the archive, an irrepressible desire to return to the origin, a homesickness, a nostalgia for the return to the most archaic place of absolute commencement’ (Derrida, Archive Fever).

Asylum Archive was originally started as a coping mechanism while I was in the process of seeking international protection in Ireland.

I started taking photographs of my environment with the small Olympus camera I brought all the way from Belgrade. I was interested in the interior of my room, the window, the table, the bed, the floor, the door, and in the architecture of the building where we all resided. I continued my primary focus and started to take photographs of the exterior of the Centre as well.

The entire creative process kept me intact and significantly helped me to overcome incarceration and confinement created by this State.

After receiving permission to remain in Ireland, I continued to document Direct Provision Centres dispersed across this island. My focus and interest remained the same, looking at the architecture of confinement, ghosts, traces, remnants – what is left after people have been transferred or deported. 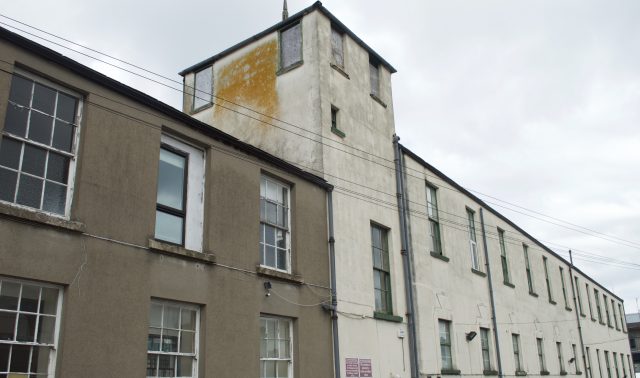 Allan Sekulla contends that ‘[t]he archive has to be read from below, from a position of solidarity with those displaced, deformed, silenced or made invisible by the machineries of profit and progress.’

Asylum Archive is directly concerned with the reality and trauma of life for asylum seekers. Asylum Archive’s objective is to collaborate with asylum seekers, artists, academics, civil society activists, among others, with a view to creating an interactive documentary cross-platform online resource, which critically foregrounds accounts of exile, displacement, trauma and memory.

Asylum Archive is not a singular art project that stands ‘outside of society’ engaged in an internal conversation; it is a platform open for dialogue and discussion, inclusive to individuals that have experienced a sense of sociological/geographical displacement, memory loss, trauma and violence (Kester).

Asylum Archive creates a collaborative and collective space where individuals from other social and political subcultures can contribute to an online repository of Direct Provision. The contributory element is deliberately designed for asylum seekers to upload their visual or written material based on their experience of Direct Provision Centres.

‘It’s our archive; they’re not owning the archive.’ (Campbell)

In an essay that accompanied the first public visual display of Asylum Archive in Galway Arts Centre in 2015, Charlotte McIvor writes:

‘The Asylum Archive resists the convention of storytelling. Instead this online archive of photographs, essays, interviews, reports and ephemera related to the lived experience of asylum in Ireland foregrounds a visual aesthetic based around absence. Primarily the work of one creator who remains anonymous at the time of writing, the photographs (which form the bulk of the archive’s content) are devoid of people to emphasize the dual burdens of visibility and invisibility experienced by those seeking asylum in Ireland as a psychological, social and legislative process.’

Asylum Archive has an essential visual, informative and educational perspective and is accessible, through its online presence, to any researchers and scholars who may wish to undertake a study about the conditions of asylum seekers in Ireland.

Asylum Archive will be preserved and deposited within the Digital Repository of Ireland for future generations to understand and recognize the most appalling treatment of people who came here to seek international protection.

Vukašin Nedeljković is an artist, activist and independent scholar. He created a multidisciplinary platform Asylum Archive: www.asylumarchive.com. Vukašin holds a Masters in Visual Arts Practice from Dun Laoghaire Institute of Arts, Design and Technology. He was awarded the Arts and Activism bursary from the Arts Council – managed by CREATE and has recently published the Asylum Archive publication.